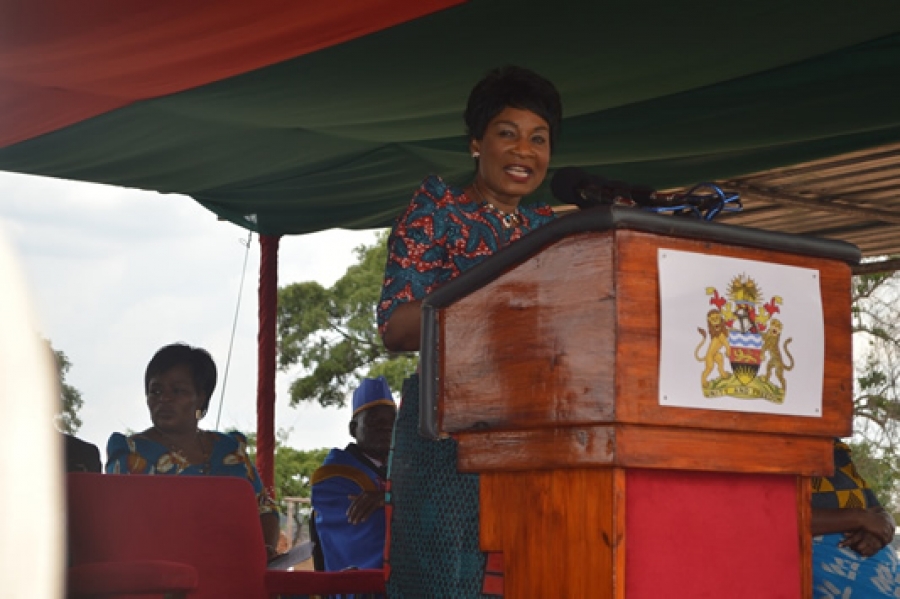 First Lady Madam First lady Gertrude Mutharika has called on traditional, religious and communities in Mchinji to work together and develop by-laws aimed at keeping girls in school.

She made the call at Pitala in Senior Chief Mkanda on Saturday when she officially launched Keep Girls in Schools By-Laws for Mkanda area in the District.

Madam Mutharika noted that despite efforts by her organisation Beautify Malawi Trust (BEAM), and other organisations programmes aimed at keeping girls in school, many girls still drop out of school due to early pregnancies and marriages.

“It is encouraging that people of Mkanda led by Sub Traditional Authority Pitala and Senior Chief Mkanda formulated their own by-laws aimed at punishing parents, chiefs who do not encourage girls to go to school,” she pointed out.

The First Lady explained that the by-laws in Mkanda area show the vital role traditional leaders could play in supplementing government’s and BEAM’s efforts and commitment of promoting girl child education.

“BEAM is working with government by providing bursaries for needy girls and we are also encouraging girls to go back to school after dropping out of school. BEAM is constructing hostels in community secondary schools to help girls who walk long distances to schoo,”she disclosed.

Madam Mutharika said a recent study conducted by BEAM shows that most girls drop out of school due to lack of interest by parents and guardians in the girls education. She therefore, implored parents to take an active role in ensuring that girls complete their education.

“I was encouraged when I read the Mkanda keep in girl’s by-laws which stipulate fines and punishments to all people who do not follow the by-laws,” she added.

“Some cases of domestic violence perpetrated in families is a result of men taking advantage of the women who are illiterate. Therefore, women should ensure that they are educated to fend for themselves and their families,” she viewed.

UN Women representative, Pamela Mkwamba said the launch of the Keep girls by laws in Mchinji was a huge landmark in the efforts towards promotion of girl education in Mchinji and Malawi as a whole, in helping raise the importance of gender equality and the attainment of gender justice.

“The launch of the by-laws should be a time for sober reflection, honest questioning and serious discussion on issues that are impacting the life of our girls, in particular issues on ending child marriages and harmful cultural practices,” she said.

Mkwamba commended the government for making significant steps in passing important gender related legislation addressing issues of various types of gender based violence through the gender equality act, the prevention of domestic violence act, child care, protection and justice act , among others.

“We recognize the positive strides that government has been taking towards addressing gender inequalities, practically for young girls. For instance ,chiefs have declared on ending early marriages and have agreed to develop a one by-law framework which will guide all chiefs to formulate by laws on gender related laws,” she pointed out.

Pioneer of the Mkanda keep in girls by laws Sub Traditional Pitala said together with other chiefs in Pitala and Mkanda, they decided to come up with laws after noting that most girls dropped out of school in the area due to pregnancies and early marriages.

“After we received training by UN women, as a female chief I worked with village committees and other leaders to develop these by-laws which are helping our girls to stay in school,” she revealed.
Some of the by-laws include ordering sugar daddies, teachers who impregnate girls or engage in relations with girls to pay goats and chickens.

Girls who do not attend classes are ordered to pay chickens.

The by-laws also discourage harmful cultural practices such as wife inheritance (Chokolo) and fisi, among other practices.