You are here: Home » Regional » Ghana: Row over the tomb of late President Atta Mills

Ghana: Row over the tomb of late President Atta Mills 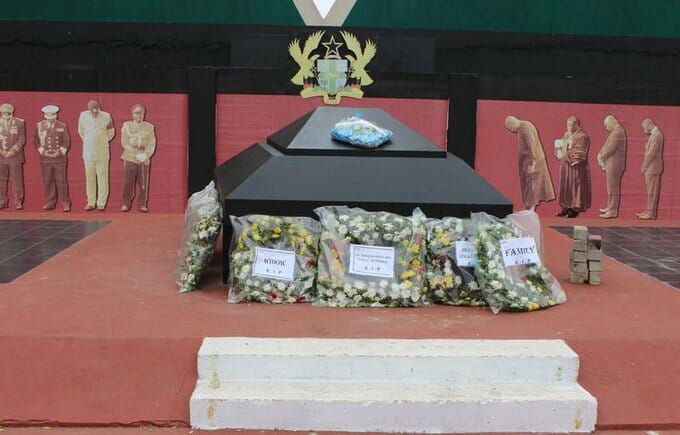 
The family of late Ghanaian President John Evans Atta Mills is furious at the government for allegedly tampering with his tomb.

The former President was buried in the capital, Accra at the Asomdwe park close to the former seat of government, the Osu Castle. July 24 will mark ten years of his passing.

His family though is accusing the government of allowing an NGO run by his former spokesperson Koku Anyidoho, to tamper with the tomb of the former President.

The Atta Mills Institute led by Mr Anyidoho with the help of the government through the Coastal Development Authority is reported to be renovating the burial site of the late President.

Speaking to the media in Parliament brother of the late President, Samuel Atta Mills, questioned why the government did not consult the family before embarking on the project.

He asked the government to immediately stop Koku Anyidoho from desecrating the place of burial of the late President John Evans Atta Mills.

“It is a very serious thing but the government has to provide the body of President John Atta Mills, we want to find out where the body is. What have you done with it, what kind of rituals did you perform over there, when curses start coming after you don’t blame anybody,” Mr Atta Mills told the reporters on Tuesday.

p dir=”auto”>A former Youth and Sports Minister Nii Lantey Vanderpuye who together with some MPs visited the graveside on Tuesday also expressed sadness about the situation, showing pictures of the grave with its tomb removed.

The Atta Mills Institute run by Koku Anyidoho has dismissed the concerns of the relations of the late president.

He told a private media outlet in the capital, Accra that the park is only undergoing renovation, an action he accuses the former government of refusing to do before losing power.

Like it? Share it!
WHO calls for action to provide migrant and refugee healthcare < Previous
Protests over deadly tribal clashes scheduled on July 24 in Sudan Next >
Latest News From Malawi
Headlines From: The Maravi Post