You are here: Home » Religion » Ghanaian  powerful Juju priest exposes popular African pastors who come to him for powers to do miracles and healing 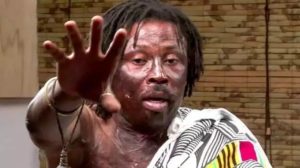 The major reason why Africa ranks higher in the number of prophets could be closely linked to one fetish priest Nana Kwaku Bonsam of Ghana who claims to have offered 1700 pastors and men of God powers to perform miracles With the advent of a number of pastors, seeking to enhance their names by any means, Bonsam’s claims are not far-fetched.

Some emerging pastors with relatively young ministries have bought expensive properties and command a huge following in Africa.

According to dailyadvert online paper, A juju priest in Ghana has claimed that he fortifies more than 1,700 pastors in Africa.

Two years ago, a Ghanaian witch doctor, Priest Nana Kwaku Bonsam, was at war with Nigeria and Africa’s most popular seer, Prophet T.B Joshua, where he vowed to expose the Nigerian man of God and run him out of his country.

The very powerful juju priest who is also called Devil of Wednesday, had also claimed that Prophet Joshua killed the late former Ghana President, Professor John Evans Atta Mills, who was one of Joshua’s best friends and adherent.

This time around, Bonsam says he is actually behind the powers of more than 1,700 preachers in Africa his number one enemy, TB Joshua, claiming the men of God come to him for fortification to perform miracles and healing.

Nigeria’s top prophet, TB Joshua Devil of Wednesday further went on to say: “Over 1, 700 pastors and so called men of God from different parts of Africa have approached me, seeking powers to perform miracles, including Prophet T.B Joshua from Nigeria.

He is my boy. I challenge him to come out and deny this. Apart from the pastors, many prominent business people and celebrated church founders in Africa frequent my shrine for my services and if they deny, I am going to name them.” Bonsam, who operates from a shrine at Sa-Peiman, a village on the outskirts of Nsawam in east Ghana, said his god is called Kofi-Kofi and provides him with supernatural powers that are desperately needed by pastors from all walks of life.

Like it? Share it!
CRWB donates a heavy duty washing machine to Kasungu Hospital < Previous
EU hands over school to Malawi Govt in Kasungu Next >