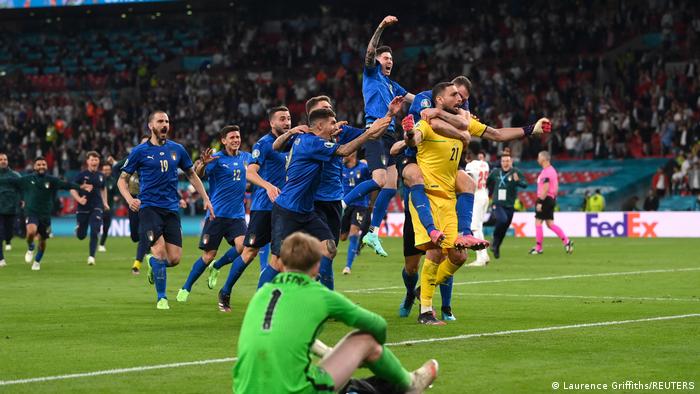 
The European Championships is one of the most anticipated sporting events in the world. Europe’s elite come together in what becomes football’s showcase event aside from the world cup.

This year, the Euros did not fail to provide plenty of action, but also managed to showcase some of the issues that are still rife in the sport.

The 2020 Euros (although played in 2021) started off with tragedy, and gave rise rise to the first talking point. In the 42nd minute of Denmark’s opening game against Nordic rivals Finland, one of football’s brightest stars, Christian Eriksen collapsed suddenly after receiving a ball from a throw-in.

The harrowing scenes of the playing falling face first to the ground will stay with players and fans alike as it was later reported that the former Tottenham star had suffered cardiac arrest, and was rushed to the nearest medical facility.

His team mates gathered around him to ensure that if these moments were to be his last, that they wouldn’t be documented by the media. Danish captain Simon Kjær consoled Eriksen’s wife as no one was certain as to what the following few hours would hold.

In the coming days, Eriksen would make a full recovery, however the problem lay in the fact that UEFA urged the game to continue after the Danes had to witness one of their countrymen dance with death.

The competition would have remained almost unchanged if the game were to be rescheduled, allowing the rattled Danish to be there for their teammate, settle their nerves, and find comfort in the fact that Eriksen was on his way to recovery.

The next talking point that arose was when the valiant Danes faced the English in the competitions semi final. The Danish went on to defy all odds, pull together, and put together a set of incredible performances, however, when they arrived at Wembley, the English fans took matters into their own hands to ensure that their countrymen would get away with a win.

This started with the disgraceful booing of the Danish national anthem, and later led to a fan shining a laser point light into the eyes of Danish goalkeeper, Kaspar Schmeichel as he was getting ready to save a penalty. Absolutely disgraceful, and a spit in the face of fair and honest competition.


The English, who were given short odds to be outright winners of the competition from soccer betting sites in South Africa to South America, eventually won the encounter, and again, UEFA showed their colours by fining the English football Federation a measly €30 000. Peanuts given the amount of money is in football.

Last yet not least, a glaring issue that has come to ruin football in recent times reared its ugly head after England’s failure to win the cup after a poor show in the deciding penalty shoot out against Italy. Each of the three Englismen to have missed penalties also happened to be black, and all three were on the receiving end of racist abuse from “fans” via social media channels.

Racism has no place in the world, and to witness the horrific backlash from English fans, and the lack of action  taken to punish or prevent such events happening again shows the lack of interest the string pullers in football actually have on real issues within their beloved sport. The Euros did far more than entertain, they gave room for football’s main men to show their true colours, colours that read “the show must go on”.