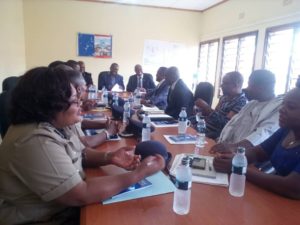 This follow an intensive meeting the two parties had aimed at iron out critical issues contributing to violence that has left some citizens injured.

The meeting was held under the conviction that democracy entails that people are free to make choice in a free, peaceful and secure environment for the coming of May 21 polls.

The gathering aimed at also for political parties and police to explore ways of ensuring that the elections be free from intimidation and harassment.

One of the key pact deal on part of political parties to work on is to advise its supporters and candidates to adopt issue based campaign while desist from insults or use of violence or abusive language in the course of conducting political campaigns.

On the part of the police, to be professional and non-partisan when dealing with political or electoral violence while investigate and prosecute all outstanding political violence cases diligently and to their logical conclusion.

IG Jose told the nation that should now remove the perception that the police favors the ruling parties urging them to always cooperate when are injured in one way of the other.

“We undertake to civic educate our police officers who will be deployed to perform elections duties that they carry out their roles with highest  levels of integrity, neutrality, professionalism  and a sense of duty in order to reassure everyone participating  in elections that safety and security  are guaranteed,” assured IG Jose.

On the other hand, CMD chairperson who is also MCP Secretary General Eisenhower Mkaka assured the nation of a peaceful electoral campaign period.

Mkaka told the public that monitoring mechanism have been put place to all political parties members to take to task those that might perpetuate violence.

“We shall not undertake or allow any of our political party members to take part in removing other parties’ flags, posters or any campaign materials or in any way interfere with their campaign work.

“We take responsibility to any breaches of code of conduct of the Malawi electoral commission while commit to take particular attention towards issues of gender based political violence” reads part of pact deal for political parties.