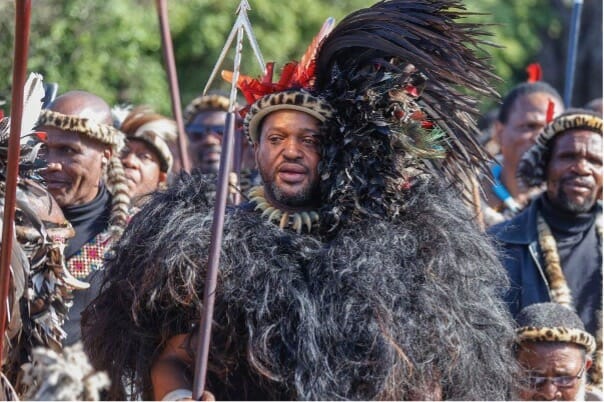 The 48 year old’s accession to the thrown faced a challenge though but after his coronation he pledged to unite the Zulu nation.

Thousands of people came out to celebrate the coronation despite the controversy surrounding his coronation.

The new king was crowned at the KwaKhangelamankengane Palace in KwaZulu-Natal province.

King Misuzulu Zulu has been crowned as the new King of the Zulu people of South Africa.

Zulu is the most populous tribe in South Africa.

The 47-year-old King Misuzulu Zulu, succeeded his father, Goodwill Zwelithini, who died in March last year after 50 years on the throne. pic.twitter.com/qZXnQUzeVV

The row surrounding the Zulu crown was on whether Zwelithini was the rightful heir. The half sisters of the king claim their late father’s will, which paved the way for him to become king, may have been forged.

Just a day before the coronation, the Supreme Court of Appeal granted Queen Sibongile Dlamini-Zulu leave to appeal a decision by the KwaZulu-Natal High Court in Pietermaritzburg, which dismissed her claim that her late husband’s will was forged.

The will nominated the late King Goodwill Zwelithini’s third wife, the late Mantfombi Dlamini Zulu, as the regent. Mantfombi then nominated her son, MisuZulu, as the successor to the throne.

At the same time, some of Zwelithini’s other children have also claimed the throne.


Zulu kingship has no formal political power, but a fifth of South Africa’s population is Zulu and its monarchy remains hugely influential.