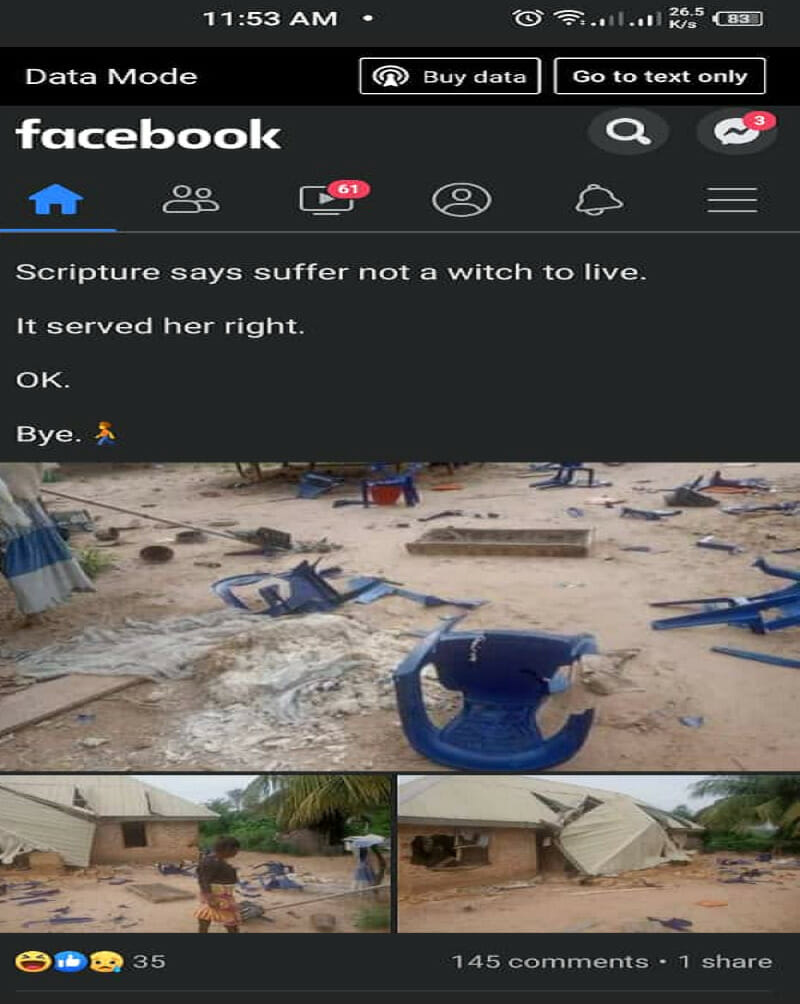 Someone drew the attention of the Advocacy of Alleged Witches (AfAW) to an incident of witchcraft accusation at Shangev Tiev, Konshisha LGA Benue State. One Terzungwe made a post justifying the maltreatment of the accused. He stated: “That witch in Konshisha who was attacked by the youths for killing a young man the other day deserved what she got. Witches and wizards must be given a taste of their own medicine and made to stew in their juice. If someone is found to be a witch, and is killing people, especially the young ones, such a person must physically be dealt with”.

Terzungwe’s view is widely shared in Nigeria. The attack or murder of an alleged witch is considered just and appropriate because many Africans believe that witchcraft is real; that people who harm others through magical means should be severely punished. In an attempt to legitimatize the persecution of alleged witches, Terzungwe alluded to witch hunting in Europe. He said: “Even in Europe and America, witch burning was such a thing. People who were found to be witches were often tied to a stake and burnt alive”. Indeed, witch burning happened in Europe. But that was about three hundred years ago. Yes three centuries ago! Europeans and Americans burnt alleged witches at stake. Should that be a justification to attack or kill imputed witches in Africa in this 21st century?

Look many Africans do not know that the reference to “European witch hunts” is a covert admission of their backwardness; that, when compared with people from the west, Africans are more primitive. That witch burning ended in Europe and America centuries ago should be a enough reason to discontinue the persecution of supposed witches in Africa. The occurrence of witch persecution in present-day Africa shows that Africans are trapped in the early modern European and Salem American mind warp. But do Africans realize this?

In addition, western churches and governments are issuing public pardons, and apologies for their role in the persecution of alleged witches centuries ago. They have acknowledged that witch hunting is a case of miscarriage of justice. Western witch pardon and apology should be a lesson that propels Africans to stop witch persecution and abuse.

Meanwhile, an advocate in Benue got in touch with a relative of the accused, who confirmed this case of witchcraft allegation and witch persecution. A local source stated that a young man had been sick for a while; he was battling cancer. Unfortunately, some youths in the community claimed that the sickness was induced by witchcraft. They assumed the ailment was a case of magical harm. Instead of consulting a medical doctor and managing the disease using an evidence-based medical procedure, some youths went to a local diviner who attributed the cause of ailment to some occult forces. The diviner identified an elderly woman, Mama, her eldest son, and the deceased father as those who were responsible for the sickness. The youths forced the accused to sit under the sun for hours, they asked them to restore the health of the ailing young man. The young man eventually died, and the youths stormed mama’s residence and destroyed it.

But some relatives were able to whisk her away to a safe location before the angry youths could harm her. The case has been reported to the traditional head of the community, not the police. AfAW will continue to monitor the handling of the case to ensure that accused persons do not suffer further abuse and violation. AfAW commends all those who worked to ensure the safety and protection of the accused. It enjoins all Nigerians to become advocates against witchcraft accusations and witch persecutions. AfAW is in contact with relatives of the accused and will work to ensure their safety and protection.