You are here: Home » Regional » 4 dead after rioters stormed US Capitol to block Biden’s win 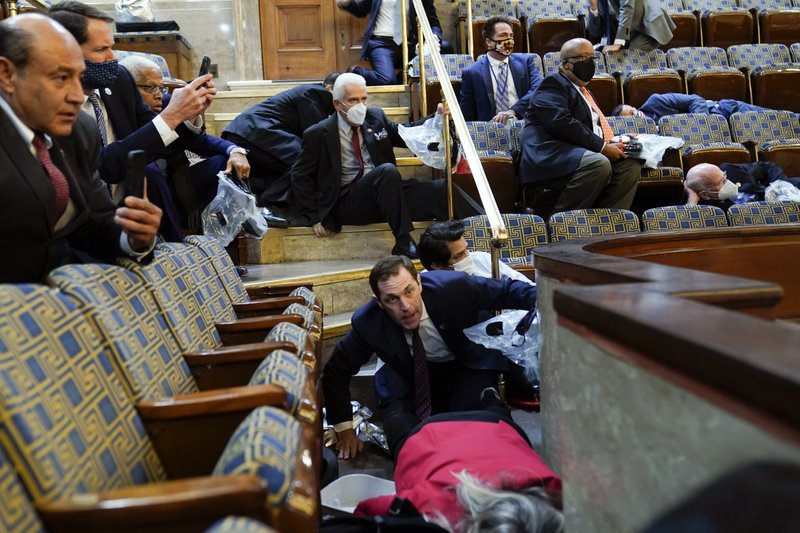 The US Capitol is once again secured but four people are dead — including one woman who was shot — after supporters of President Donald Trump breached one of the most iconic American buildings, engulfing the nation’s capital in chaos after Trump urged his supporters to fight against the ceremonial counting of the electoral votes that will confirm President-elect Joe Biden’s win.

Shortly after 1 p.m. ET Wednesday hundreds of pro-Trump protesters pushed through barriers set up along the perimeter of the Capitol, where they tussled with officers in full riot gear, some calling the officers “traitors” for doing their jobs.

About 90 minutes later, police said demonstrators got into the building and the doors to the House and Senate were being locked.

Shortly after, the House floor was evacuated by police. Vice President Mike Pence was also evacuated from the chamber, he was to perform his role in the counting of electoral votes.

An armed standoff took place at the House front door as of 3 p.m. ET, and police officers had their guns drawn at someone who was trying to breach it. A Trump supporter was also pictured standing at the Senate dais earlier in the afternoon.

A woman, who is yet to be identified, died after being shot in the chest on the Capitol grounds, DC police confirmed to CNN. More information on the shooting was not immediately available and a police spokesperson said additional details will come later. DC Police Chief Robert Contee said three other people died from medical emergencies during the riot.

“One adult female and two adult males appear to have suffered from separate medical emergencies, which resulted in their deaths. Any loss of life in the District is tragic and our thoughts are with anyone impacted by their loss,” Contee said at a news conference Wednesday night.

Multiple officers have been injured with at least one transported to the hospital, multiple sources tell CNN.

Smoke grenades were used on the Senate side of the Capitol, as police work to clear the building of rioters. Windows on the west side of the Senate have been broken, and hundreds of officers are amassing on the first floor of the building.


The Senate floor was cleared of rioters as of 3:30 p.m. ET, and an officer told CNN that they have successfully squeezed them away from the Senate wing of the building and towards the Rotunda, and they are removing them out of the East and West doors of the Capitol. It’s not clear if any of the individuals have been taken into custody.

The US Capitol Police worked to secure the second floor of the Capitol first, and were seen just before 5 p.m. pushing demonstrators off the steps on the east side of the building. With about 30 minutes to go before Washington, DC’s 6 p.m. ET curfew, Washington police amassed in a long line to push the mob back from the Capitol grounds.

It took until roughly 5:40 p.m. ET for the building to once again be secured, according to the sergeant-at-arms.

The stunning display of insurrection was the first time the US Capitol had been overrun since the British attacked and burned the building in August of 1814, during the War of 1812, according to Samuel Holliday, director of scholarship and operations with the US Capitol Historical Society.

The shocking scene was met with less police force than many of the Black Lives Matter protests that rolled across the country in the wake of George Floyd’s killing at the hands of Minneapolis police officers last year.

While federal police attacked peaceful protesters in Lafayette Square outside the White House over the summer, clearing the way for Trump to take a photo in front of a nearby church at the time, protesters on Wednesday were able to overrun Capitol police and infiltrate the country’s legislative chambers.

Like it? Share it!
Trump acts ‘un-American’: supporters’ Capitol siege is beyond “wrong and illegal” < Previous
Soldiers storm Ghana’s parliament amid chaos over election of speaker Next >
Latest News From Malawi
Headlines From: The Maravi Post