You are here: Home » Opinion » Dictator Presidents Of Northern Extraction Destroy Our Democracy By Bayo Oluwasanmi

June 12 was Democracy Day in Nigeria.

Are we in a democracy or in a dictatorship? Is there any semblance of democracy in Nigeria? Is Nigeria a true federalism? Are we coming apart or coming together? Is Nigeria one country? Do we get along?

Do we have freedom of press, freedom of speech, freedom of religion, freedom of movement? Do we operate a Constitution written by the people for the people? Do we have the right to quality, accessible, and affordable education, healthcare, good paying jobs? Do we have access to treated water, good roads and uninterrupted electricity? Are we safe and secure? Are all Nigerians treated equally? 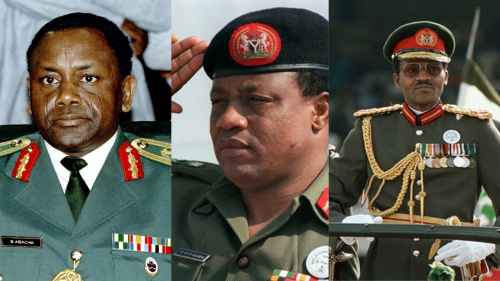 When we elected Muhammadu Buhari, we thought we elected a “converted dictator” who became a “born again democrat.” It will amount to annoying repetition to catalogue the tyranny under Buhari the aged despot.

Consider: Why is it that presidents of northern extraction are bigots, tyrants, dictators? Why is it that they despise rule of law, freedom, justice? Why are these crude northerners alien to democracy? Whenever northerners serve as presidents, they destroy our democracy. They install feudalism and  dictatorship. They unleash terror on Nigerians. They exhibit brute dominance. They employ merciless tactics to achieve their Fulani political and religious agendas. Think of the reign of terror by the butcher, Sanni Abacha. Remember the gap tooth evil genius Ibrahim Babangida who annulled the freest election in Nigeria. He murdered Abiola.  He killed Dele Giwa, one of our best and brightest investigative journalists.

And now another gap tooth despot with sick smiles from the north, Muhammadu Buhari. He runs Nigeria like North Korea. He’s behind Fulani terrorists killing Yorubas and non-Fulanis all over the country. He abrogated all the basic freedoms of democracy. We can’t protest. We can’t express dissenting views. He’s not accountable to anyone. He champions Fulani agenda. He banned Tweeter. He advocates open grazing. He said we should accommodate and live with Fulani and Boko Haram terrorists. He threatened Igbos with another civil war for exercising self-determination. He runs non-inclusive government where Fulanis are in control of federal civil service, agencies, corporations, institutions, security apparatus, the armed forces, name it!

Growing tensions between civilization and savagery has been the repetitive theme of our political history for 61 years. The core of our conflict lies in the fact that the South believes in democracy, fights for justice and the rule of law. The South represents civilization. On the other hand, the North pride itself in feudalism and urges toward savagery. They are anti civilization and anti democracy. They like to impose Sharia Law on Nigerians. In fact, they want to Islamize Nigeria by force. They believe in brutal force as the best way to govern. They rejected all progressive ideas and democratic principles for a true and balanced federalism. What further evidence do we need to prove that we are different people. We are not one country. We can’t live together as one country. Isn’t time we go our separate ways and live happily ever?

How can people with conscience especially Yorubas continue to support Buhari the tyrant? Their continued support of the totalitarian regime speaks volumes not about their political views, but rather their character. Only evil people will support evil president.