You are here: Home » Malawi » Health » ‘Do one thing’ to save lives on World Drowning Prevention Day: WHO

‘Do one thing’ to save lives on World Drowning Prevention Day: WHO

The appeal on World Drowning Prevention Day outlines actions that individuals, groups and governments can take, and highlights initiatives already underway in some countries.

The majority of drowning deaths, more than 90 per cent, occur in low- and middle-income nations, with children under five at greatest risk.

These deaths are frequently linked to daily routine activities, such as bathing, collecting water for household use, travelling on boats or ferries, and fishing.  The impacts of monsoons and other seasonal or extreme weather events are also a frequent cause.

“Every year, around the world, hundreds of thousands of people drown. Most of these deaths are preventable through evidence-based, low-cost solutions,” said Tedros Adhanom Ghebreyesus, the WHO Director-General.

To commemorate World Drowning Prevention Day, cities across the world are lighting up some of their prominent landmarks in blue.

WHO has its headquarters in Geneva, and the Jet d’Eau in Lake Geneva – one of the most famous attractions in the Swiss city – will be illuminated in blue on Monday evening.

The UN’s health agency works with partners, including Bloomberg Philanthropies, the Royal National Lifeboat Institution (RNLI) in the United Kingdom, and the Global Health Advocacy Incubator, to raise awareness on drowning prevention.

“In many cases, we know what works to prevent drowning. We’ve developed tools and guidance to help governments implement solutions – and if we do more together, we really can save thousands of lives,” said Mr. Bloomberg, the WHO Global Ambassador for Noncommunicable Diseases and Injuries.

WHO has recommended six evidence-based measures to prevent drowning, which include installing barriers controlling access to water, and training bystanders in safe rescue and resuscitation techniques.

School-aged children also should be taught basic swimming and water safety skills, while boys and girls should be provided supervised daycare.

Formal swimming lessons can reduce the risk of drowning.

Meanwhile, groups can do their part, for example by hosting public events to share water safety information or launching water safety campaigns.

The UN agency and its partners are supporting countries to design and implement new prevention initiatives.

Bangladesh is among countries that have committed to drowning prevention programmes, and authorities there have started a three-year scheme to reduce drowning among children.

As part of the programme, the government will take over the 2,500 daycares established and funded by Bloomberg Philanthropies over the past decade.  The authorities will expand the programme by adding an additional 5,500 daycares to provide supervision to 200,000 children aged one to five years.

Other countries that have received support for drowning prevention initiatives include Vietnam, Uganda and Ghana. 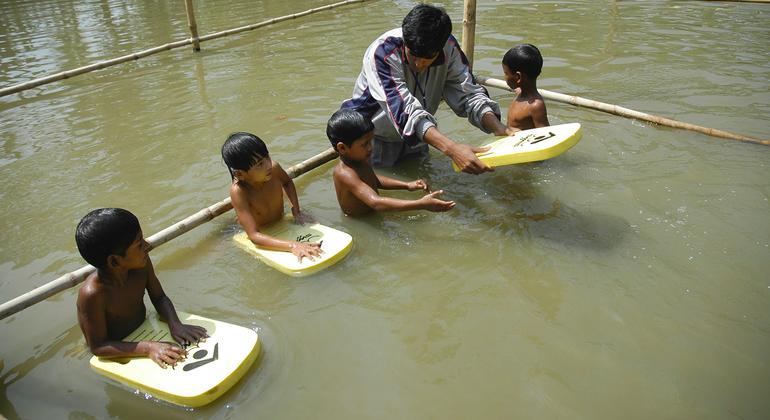 Like it? Share it!
Monkeypox: How it spreads, who’s at risk – here’s what you need to know < Previous
Man exposing self and rubbing on people in Gwinnett County is wanted by police Next >
Latest News From Malawi
Headlines From: The Maravi Post