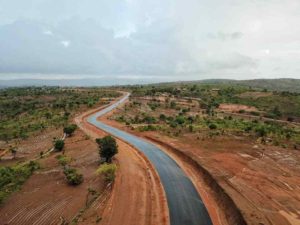 Dowa District is witnessing a landmark road infrastructure development which is yet another achievement of Democratic Progressive Party-led government under the leadership of President Professor Arthur Peter Mutharika.

History has it that, the former President Bingu Wa Mutharika launched the upgrading of the Lumbadzi-Dowa-Chezi Road to bitumen standard class 1 in 2009.

The project kicked off in the same year and was expected to be completed in 2013 but it was stalled by the then People’s Party-Led government under Joyce Banda following the death of President Bingu Wa Mutharika in 2012.

The 3-year-road construction works were put to a halt when only few kilometres of the stretch had been completed.

Traditional Authority Chiwere of Dowa had on several occasions asked the then government and the Dowa District Council to grade the bumpy road after observing that little or no attention at all was given to this road, to no avail. There came in Democratic Progressive Party-led government under President Professor Arthur Peter Mutharika and it promised to upgrade the road.

In April, 2018, government identified China Civil Engineering Construction Cooperation Limited to do the work. The Chinese contractor redesigned the road which has seen initial 20 kilometre stretch reduced to 14.4 kilometres. The K3.5 billion Malawi government funded project started in April, 2018 and is expected to be completed by October, 2019.

The K3.5 billion Dowa-Chezi road construction has involved locals in the project, reducing the issue of unemployment among the surrounding communities. Once completed, the road will reduce cost of repairs for vehicles, reduction in transport costs as well as easing challenges which the district is facing in transfering patients to Dowa District Hospital in time.

The road will also help those who engage in agriculture to access markets and other basic social amenities more quickly, a development which will improve incomes and livelihoods of people in Dowa.