You are here: Home » Opinion » ENDSARS: The Barbarians Want Vengeance; The Case of Tunde Abass, By Kunle Wizeman Ajayi

As I write, Tunde Abass is just being released after 4 days Illegal detention by the Lagos Command of the Nigeria Police Force. Looking at the cameo picture with Adejobi Olumuyiwa, the Lagos police spokesperson; his orange top and trousers is stained with blood and dirt just as his face is swollen and battered. As a Revolutionary, Tunde managed a fistful hail of victoria ascerta! If you fight, you might win. If you fail to stand against oppression, you have lost.

The immediate lesson is that no one is really safe when Barbarians are in charge of safety! 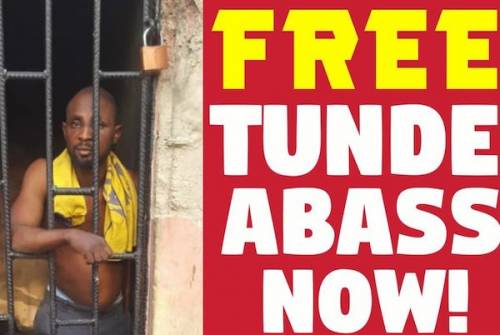 His sin is having the courage to film an incident of police brutality. He was nabbed, tortured, and threatened. Even after the magistrate court ordered for his bail, CP Hakeem Odumosu and his officers refused to release Tunde Abass.

The import of Tunde’s inhuman treatment is in the fact that since Odumosu and his gangs of misrulers are not yet in jail for the uncivil atrocities against the #ENDSARS Revolts and protesters; they want to forment more violence in order to put fear into the mass of people. This ploy has fallen like a pack of cards!

Working people will continue to march against the greed and power of our oppressors and defend our rights to live in peace and indeed.

Police officers are being owed salaries and the president has failed to increase their salaries as promised during and after the #ENDSARS Revolts. Note that the fifth Demand of the Five point Demands (5for5) is the increments in police and soldiers salaries, Allowances, and welfare.

As it is, the brutality against Tunde Abass is a proverb. The barbarians cannot do without blood. our oppressors cannot do without oppressing us. It’s in their DNA. Police brutality is a lifeline for our misrulers globally. The crudity of their anti-democratic actions only show the weaknesses with which they can condole whatever is of common and good sense.

Going forward, all who desire another world must work towards a more advanced, sophisticated, massive, and revolutionary season 2 of such upheaval as the #ENDSARS Revolts. We must not allow the LekkiMassacre and others discourage us. We owe to our heroes and matyrs the work to unite and fight. This is why we must all rise and demand the removal of CP Hakeem Odumosu as we correctly build the momentum for #BuhariMustGo. On top the madness against protesters during #OccupyLekkiTollGate; the continued harassment and extortion of citizens show a determined fascist hegemony working hard to impose violence to maintain it’s illegitimacy and unpopularity over a people determine to possess their own destiny.

Like it? Share it!
Morocco and the African Development Bank on the frontline in the fight against COVID-19 < Previous
Trisolace: Creating agribusiness opportunities for young Ghanaians Next >
Latest News from Maravi Post
Recent Posts: The Maravi Post