HomeBusinessFor Africa to prosper, Africans need to be able to move
BusinessDevelopment

For Africa to prosper, Africans need to be able to move 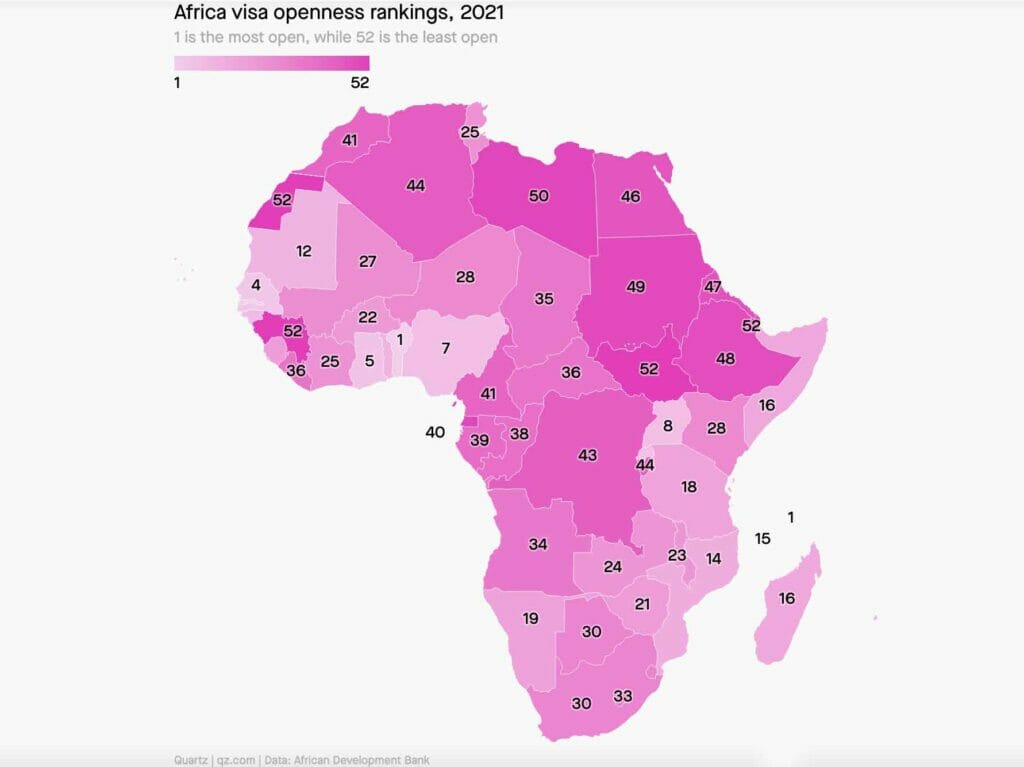 In 1960, the Ethiopian runner Abebe Bikila made history in Rome as the first athlete from sub-Saharan Africa to win an Olympic gold, even as he broke the marathon world record. All this was made more remarkable by the fact that he ran completely barefoot.

Akinwumi Adesina, the president of the African Development Bank (AfDB), recounted this story to Quartz as an analogy for his unbridled optimism in the continent’s future.

It’s easy to be skeptical about Africa’s economic promise, given all that has happened in the recent past: covid-19; the Ukraine war and its pressure on food and fuel costs; macroeconomic challenges that have led to the devaluation of several African currencies; and the disastrous effects of the climate crisis.

But Adesina, who has been dubbed, “Africa’s optimist-in-chief,” believes that, similar to Bikila, the future of Africa will defy everyone’s expectations.

“By 2050, 25% of the world’s population will be in Africa,” Adesina said in his opening address at the recent Africa Investment Forum (AIF) in Abidjan, Côte d’Ivoire. “Africa holds 65% of the world’s uncultivated arable land and is the largest source of renewable energy in the world… The future of Africa lies in investments, not aid.”

Championed by AfDB and in partnership with several large regional and global funders, AIF, Africa’s largest investment marketplace, has mobilized over $141 billion in investment interest since its inception in 2018, with $31 billion of that from the latest edition of AIF.

Adesina outlined grand priorities for AfDB and its partners: ramping up special economic zones for agro-industrialization; redefining the future of electric vehicles, given Africa has the world’s largest cobalt deposits and sizable lithium reserves too; and unlocking investment opportunities in renewable energy.

In an interview, Adesina spoke to Quartz about a key ingredient in the future of the African economy: the mobility of people, as envisioned in the African Continental Free Trade Area (AfCFTA), the largest free trade area in the world. The ease of movement of people across Africa is much more than a question of visa access and travel documents; it is also one of flight costs, logistics, and digitization.

2016: AfDB publishes its inaugural edition of the Africa visa openness report, showing that it is easier for North Americans to travel in Africa than Africans.

2018: The African Union launches the Single African Air Transport Market (SAATM), an initiative to open up Africa’s skies. By mid-2021, 34 countries, accounting for 75% of Africa’s passenger traffic, sign up to the SAATM, with 10 of them ready to fully implement it.

2019: The idea of a single African passport starts to gain traction, but its implementation is hindered by various factors. By mid-2021, the protocol on the free movement of persons in Africa will have been signed by 33 countries, but only ratified by four (Mali, Niger, Rwanda, and São Tomé and Príncipe), far short of the 15-country threshold needed for the protocol to become operational.

2021: Trading under AfCFTA comes into effect with the first batch of goods under the preferential agreement being shipped from Ghana to South Africa in January. By mid-2021, the agreement has been ratified by 38 countries that commit to reducing 90% of trade tariffs on goods within five years for developed countries and 10 years for less-developed.

September 2021: The Africa Export-Import Bank (Afreximbank), the continent’s trade finance institution, launches a payments platform to enable instant payments in African currencies between merchants on the continent. Pan-African Payment and Settlement System, or PAPSS, is a boost to AfCFTA.

The interview below with Adesina Akinwumi has been edited for brevity and clarity.

On intra-Africa trade and travel:

Trade is not done in a vacuum. It’s people that trade. Apart from the fact that you need connectivity, you also need to have freedom for people to move from one place to the other. I believe we cannot say we have borderless trade when we put up barriers for people to travel. And I know the countries are making a lot of progress. Before in Africa, you couldn’t travel with your national ID alone, but today in eastern Africa, if you’re from any of the other countries in the region, all you need is an identification card and you can travel throughout the region.

This is good for travel, trade, and investment. Other African countries are improving in visa openness, an advocacy tool which was launched by the AfDB in 2016. Some of the countries that have done this and are doing impressively well include Rwanda and Benin. In fact Benin, [Seychelles and The Gambia] are probably the highest ranking countries in the index. Nigeria is beginning to have a more open system. Ghana too. A lot of progress is being made, but there are still some regions lagging behind, especially North Africa.

The issues, however, go beyond just passports. There needs to be a lot of education for passport control officers and also improvement of information at border posts. This is where we do a lot in terms of border posts in Africa, but also digitization…the need for digital information, so you won’t need to carry a passport with you in future.

On the importance of infrastructure:

But even all this is not enough. If you have a good passport, but there are no roads to travel on, or the flights are too expensive and it’s cheaper to fly to London or Dubai than somewhere else on the continent, it makes no sense. In addition to visa openness advocacy, this is where the AfDB is doing even more, investing massively in transport infrastructure. Take, for example, this year at AIF, we were able to secure $15.6 billion to develop a six-lane highway corridor from Lagos to Abidjan. That’s where 75% of all the trade in the ECOWAS region happens. This will transport everything and will be borderless in that people can travel freely across that corridor.

Construction is being done with supra-national laws, meaning it transcends the laws of individual countries. Another case, we invested significantly in Kazungula bridge linking Namibia, Botswana, and Zambia. On that corridor the wait time for trucks crossing the borders went from 14 days to one hour after AfDB’s investment. We also invested $1 billion in the construction of a highway between Addis Ababa to Nairobi to extend to Mombasa. That alone will allow an increase in trade of around 400% between Kenya and Ethiopia. These are the things that will not only make it easier for people to travel, but provide the infrastructure for travel.

On the logistics of flights in Africa:

When it comes to open skies, we still have quite significant challenges. It’s still very expensive to travel by air. Some progress has been made, but not enough. SAATM is good, but if African airlines are not flying in the air, why did we liberalize the sector? A lot is needed to increase the number of African-owned airlines and improve their efficiency. The best we have in Africa is Ethiopian Airlines.

A lot still needs to be done to improve management and safety of our airlines. These are areas AfDB is investing heavily in…especially modernization of airports. For example, we helped expand and modernize Kotoka airport in Accra. The Blaise Diagne International Airport in Dakar was also done by AfDB. [And also] airports in Morocco, Togo, and Guinea.

African visa openness by the digits

2/3: The proportion of African countries that improved or maintained their Africa visa openness scores between 2016 and 2021

$63: Average visa fee for Africans traveling on the continent

$12-$250: Range of visa fees for Africans visiting other African countries, depending on the length of stay

72 hours: Average processing time for issuing a visa for Africans traveling in Africa

1-10 days:  Range of processing times for visas for Africans traveling in Africa, for where data was available

On emerging technologies on the continent:

We invested in terrestrial cables linking Niger, Chad, all the way to Algeria, and then Europe. That backbone has brought down the price of broadband, facilitating significantly the innovations seen today in fintech and some of the financial engineering innovations mentioned including crypto. If you want to do crypto, you need to have internet access.