Guinea’s ruling junta has told a Confederation of African Football mission that it will meet the timetable for staging the 2025 Africa Cup of Nations (CAN).

CAF has sent a team to the impoverished and volatile West African state to assess its progress for hosting the tournament.

Colonel Mamady Doumbouya, who appointed himself president after taking power in a coup in September 2021, met with the scrutineers on Wednesday.

“They came with a message, and this message was, ‘Is 2025 feasible for us (Guineans) or not?’, Sports Minister Lansana Bea Diallo said.

“The president was straightforward — ‘We made this a national priority, and the national priority is for 2025, we won’t go for 2026 or 2027, we will organise it in 2025’,” the minister was quoted on state TV late Wednesday as saying.

“And that’s the word of the head of state which has been given today,” he said.

Hosting Africa’s biggest sporting event is a major challenge for Guinea, which suffers a chronic lack of sporting and transport infrastructure.

The country also has a long history of political turbulence.

Last year’s coup saw the ouster of octogenarian president Alpha Conde after bloody protests over his bid for a third term in office.

The takeover has stirred frictions with the influential West African bloc ECOWAS, which has been pushing for an early return to civilian rule.

On the eve of the CAF visit, Doumbouya issued a decree declaring the 2025 competition an issue of “national and priority interest.”

All spending for organisational needs “will be processed as a matter of urgency,” and procedures will be fast-tracked to allocate land needed for the tournament.

In March, Doumbouya named a fresh organising committee after one of its members publicly doubted whether it was feasible to host the tournament in 2025.

The CAF mission appears to have been encouraged by the visit.

“Today we are really reassured by Guinea’s preparedness,” said one of its members, Benin’s Mathurin de Chacus.

Doumbouya “spoke like a soldier — he’s determined to organise CAN for the Guinean public,” he said in remarks broadcast on television.

The delegation will brief CAF on the outcome of its mission, he said.

Guinea was originally scheduled to stage CAN in 2023, but this was pushed back by two years when the list of organising nations was reshuffled in 2018.

The 2023 event will be hosted by Ivory Coast. 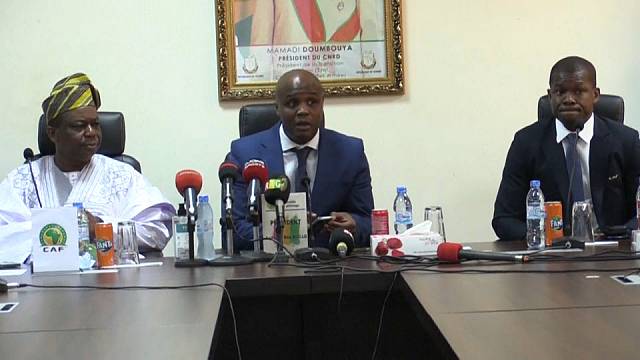