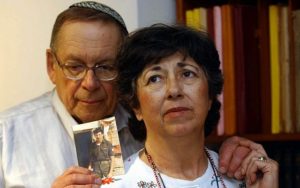 Miriam and Yoni Baumel in 2003 holding a picture of their son Zachary, who had been missing in action since 1982. (Flash90)

According to BBC, The body of Sergeant First Class Zachary Baumel, a US-born tank commander, was flown back to Israel on an El Al plane a few days ago.

He was one of three soldiers still listed as missing in action since the Battle of Sultan Yakoub.

Sgt Baumel’s remains were repatriated via a third country after an operation by Israeli intelligence agencies.

The Israel Defense Forces (IDF) provided no further details, but Israel’s Channel 13 television reported that Russia had been involved.

Last September, a Russian military spokesman Maj Gen Igor Konashenkov said Israel had “appealed to Russia with a request for help finding the remains of Israeli servicemen located at specific co-ordinates in Syria” and that a “search was organised after Russia agreed to the operation with our Syrian partners”.