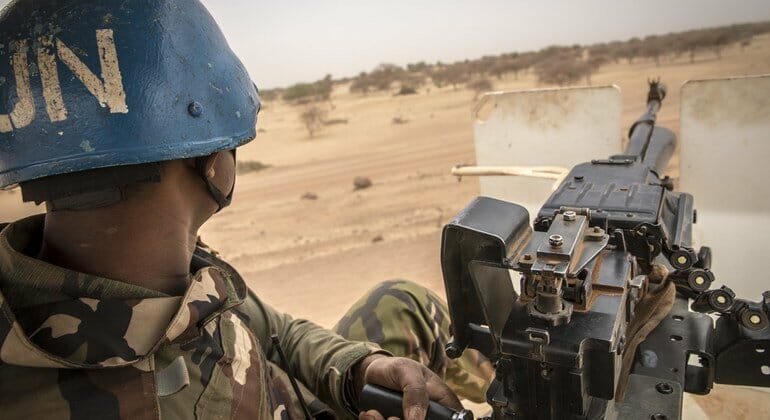 The blue helmets – who were serving with the UN Stabilization Mission in Mali (MINUSMA) – died when their armoured vehicle ran over an improvised explosive device some 60 kilometres northeast of Gao on Tuesday.

Along with the deceased peacekeepers, who were both from Egypt, another five Egyptian blue helmets were also seriously injured in the attack on a logistics convoy, on the Tessalit to Gao highway.

“The Secretary-General expresses his deepest condolences to the families of the victims, as well as to the Government and people of Egypt, whose soldiers continue to pay the highest price in the service of peace in Mali. He wishes a speedy recovery to the injured,” his spokesperson said in a statement, which also urged the authorities to bring those responsible to justice swiftly.

The outrage may constitute a war crime, said MINUSMA, which noted how attackers frequently used improvised explosive devices to try to “paralyze the operations of the UN Mission and to obstruct the return to peace and stability in Mali”.

MINUSMA noted that 177 of its soldiers have been killed since it was established nearly a decade ago, including four last month.

Mali’s northern region has been in the grip of self-styled Islamic State-affiliated terrorists for years, who have also established themselves in the centre of the country, and in neighbouring Burkina Faso and Niger.

Also condemning the attack, the UN Security Council expressed concern about the chronic lack of security in Mali, which continues to face political and humanitarian challenges, after the military seized power in a coup nearly two years ago.

An 18-month political transition agreement that was supposed to end in March this year was extended to 24 months by the country’s military authorities, who seized power in May last year.

As part of its mandate, MINUSMA’s role in Mali is to continue to provide support for free and fair elections.

The killings come as the UN Secretary-General issued a statement welcoming the lifting of sanctions imposed on Mali by the West African regional economic bloc, ECOWAS.

The move is a result of progress made on defining the timeline of transitional rule in Mali, which Mr. Guterres’s statement noted were expected to be concluded by March 2024 “at the latest”.

Military leaders initially announced in January that there would be a four year delay in the transition to elected civilian rule.

In addition, the UN chief called on Mali’s partners to help implement reforms “and the holding of the upcoming elections in full respect of principles of equity and freedom”.

The 2015 Peace and Reconciliation Agreement remains a key foundational document for Mali, Mr. Guterres insisted, before calling on all the signatory parties to the deal to “redouble” their efforts to implement it, including by holding a high-level meeting on the disarmament, demobilization and reintegration of former fighters to civilian life.
Sourced from United Nations Africa Pages

Like it? Share it!
Algeria to reopen its border with Tunisia < Previous
Nonbelievers and Freedom of Religion or Belief in Nigeria Next >
Latest News From Malawi
Headlines From: The Maravi Post