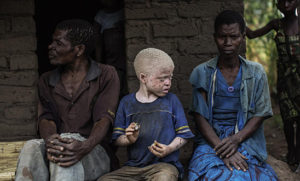 An albino child sits between his parents in the traditional authority area of Nkole, Machinga district, on April 17, 2015. Six albinos have been killed in the poor southern African nation since December, according to the Association of Persons with Albinism in Malawi. AFP PHOTO / GIANLUIGI GUERCIA (Photo credit should read GIANLUIGI GUERCIA/AFP/Getty Images)

The message on the placard reads “We are your equals! We need empowerment! Another placard reads: “We are humans too!” “No more talk, we need action!”

Such is the outcry by persons living with albinism, led by their civil society organization Association of Persons with Albinism of Malawi (APAM). In reaction to the recent rise in the country of the cruel and inhuman killings of people with albinism.

The Maravi Post, at the outset, condemns this act of inhuman immorality and cruelty. No person in democratic Malawi should ever have to reaffirm themselves as “human too.” More importantly, all people living in Malawi are guaranteed their right to life. That guarantee comes with the right to being protected by the country’s internal security apparatuses such as the Police and secret service. It goes without saying, the persons with albinism are under the protection of the President of the land, who is Custodian-in-Chief of our Constitution.

According to scientific research “people are born with albinism because they inherit an albinism gene or genes from their parents. If just one parent has the gen and the other parent has a normal pigment gene, their children won’t have oculocutaneous albinism. But each child will have a one in two chance of being a “carrier” of an albinism gene.

Albinism can affect people of all races, and there are different kinds of albinism. Some people with a condition called oculocutaneous albinism have extremely pale skin and eyes, and white hair. Others with this same type of albinism might have slightly more color in their hair, eyes, or skin.”

On Thursday President of the Malawi Congress Party, Dr. Lazarus Chakwera, held a Press Conference in which he pledged to end this dreadful scourge within one month of his election to the presidency in May.

On Friday Malawi Vice President Dr. Saulos Chilima met with leaders of APAM and its members at his Area 10 residence, to discuss possible solutions to the killing of the innocent people, simply because they are people with albinism.

In an address in January to UTM-US Diaspora Wing, Chilima said the Police needs to be vigilant against the spate of these criminal acts. He further said that it is important to research on who is buying the bones of persons with albinisms.

Indeed, it is a wonder to many right-thinking persons: who is requiring for the people with albinism to be killed, making many to live in fear for their lives.

While the Office of Ombudsman has issued and is circulating a petition to b e signed to show solidarity and express stand against the merciless killing of persons with albinism, more is required. The petitions are good, pledges are good, and our affirming our solidarity with brothers and sisters born with albinism is great, Malawi needs urgent action to secure an instant stop, root out the criminal killings.

Persons with albinism require three things from our internal security agencies in Malawi (namely the Police and the National Intelligence Bureau (NIB).

Firstly, the persons living with albinism need to be assured from the highest officials in the land, the police and other agencies. Their safety is a provided for in the Constitution.

Thirdly, the NIB in collaboration with the Police and Immigration officials must conduct their intelligence research and find where the bodies are being exported.

Why for example are certain vehicles with funny license plates are not searched? There must be no Malawians who are above the law. If there is a provision that vehicles are searched at border crossings, this provision must be observed on all cars.

The Maravi Post has learned that there are certain vanity registered vehicles are never searched at the border and Police road blocks. The cars with these dubious number plates must be scrutinized as are other ordinary vehicles.

We call on all communities in Malawi to come up and voice concern and affirm they will join the battle to rid our communities of the criminal acts of killing persons with albinism. Tradition authorities and people at the village level, you know your people, guard and protect the people in your areas.

We call upon the President, his cabinet and security agencies to speak up and speak out this menace.

No Malawian should ever have to declare: “We are human too!”

The Maravi Post joins APAM and its members, political parties that have added their outcry voices; we affirm that we are all equal. We need to be empowerment. And we demand urgent, utmost action.

This is what democracy is all about.

Publisher, Sr. Editor, Management and Staff of The Maravi Post