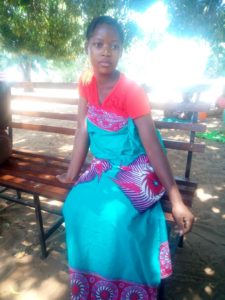 At just 17 years, Hadijah Mdala, who hails from Lulanga Village in the area of Sub Traditional Authority Lulanga in Mangochi, is a mother to a baby girl born on October 30, 2018.

She did not get pregnant by accident; it was by design after she willfully dropped out of school to get married to a fellow teenager, Yunus Kasimu.

“My relationship with the father of my daughter started in school, then I got pregnant and dropped out of school,” Hadijah says.

She delivered normally and she finds it ordinary to drop out of school just to carry out the duties of not only a mother to her baby, but also a wife.

Any prospect that she would one day go back to school seems to have deserted her as, through her silence to leading questions, one can tell that only marriage and parenthood are foremost on Hadijah’s mind.

“My daughter is at home, she is doing fine. We are now married and we stay together because marriage is what I have been longing for,” she explains.

Hadijah’s situation reflects that of many young girls in Mangochi and across the country who drop out of school for early marriages.

The United Nations Children Fund (UNICEF) describes school dropout as being characterised by pupils not having access to a school in their community, not enrolling despite the availability of a school, enrolling but later than they should have and also enrolling but not attending school.

A joint report by UNICEF and the United Nations Educational, Scientific and Cultural Organisation (UNESCO) on the global situation of out-of-school children estimates that one in five adolescents are not in school compared to almost one in 10 primary school-age children.

The report also shows that as children get older, the risk that they would never start school or drop out increases

According to the 2014 Malawi National Education Profile, 11 percent of children of primary school going ages are out of school due to, among other factors, early marriages and pregnancies.

Moved by this plight, Amref Health Africa in Malawi, a non-governmental organisation that advocates for youth friendly sexual and reproductive services, is championing the five-year Stand Up for Adolescent project, which runs from 2017 to 2022.

The project aims at reducing teenage pregnancies and child marriages in Sub-Traditional Authority Lulanga by, among other interventions, providing outreach clinics which are youth friendly to enable young girls who cannot abstain have access to sexual and reproductive health services.

Charlene Chisema, who is the project officer, says the 2016 Malawi Demographic and Health Survey recorded a pregnancy rate of about 37 percent among teenagers in Mangochi.

“Mangochi was at 37 percent which is extremely high. That did not rule out Sub-Traditional Authority Lulanga. Most children do not go to school which puts them at risk of teenage pregnancies,” she says.

She says the project seeks to reduce teenage pregnancies by working with the adolescents through providing peer education and dialogue meetings, among others.

“We are also empowering youth so that they can know the biological changes that happen during adolescence and how they can say ‘no’ to pressure that forces them into marriage,” she says.

So far, Stand Up for Adolescent Project has trained about 80 peer educators to sensitise teenagers as well as communities on adverse effects of early pregnancies and teenage marriages.

Stiya Guma, Health Surveillance Assistant (HSA) at Lulanga Health Centre, who is also the focal person of youth friendly services at Mwambo Health Post, said not many of the youth in Lulanga were accessing youth-friendly services.

So much work needs to be done in the area to save the girl-child and, according to Chisema, Amref Health Africa has also recruited two community facilitators from Lulanga and through their engagement with the communities, traditional leaders have been encouraged to take a leading role in stopping young girls from getting married early.

“Amref Health Africa came in and trained us on youth-friendly services. We can now meet youth clubs in the communities to educate them about where they can access health services such as family planning methods, STIs treatment as well to enlighten them on the consequences of early pregnancies.

“The response has been positive and encouraging. Now about 86 percent of youth come to the health centre for family planning services. Depo-Provera and condoms are the most preferred contraceptive methods among the youth in the area.

“Currently, out of 10 HSAs in the area of Lulanga only two were trained on youth-friendly services and they cover 43 villages with 25 youth clubs,” he says.

Chisema added that Amref Health Africa has also recruited two community facilitators from Lulanga and through their engagement with the communities, traditional leaders have been encouraged to take a leading role in stopping young girls from getting married early.

“Our plan is to see a high retention of young girls, including Hadijah, in school by 2012,” Chisema says.

Admarc Workers threaten to go on  Strike, Demand Dissolution of Admarc Board