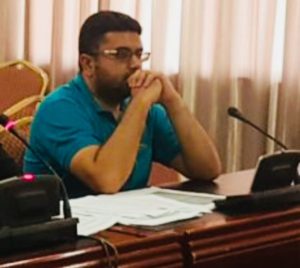 Karim  has been arrested in connection  to the Malawi Police Service (MPS) food rations scam,

According to sources, the trio has been taken to ACB offices in Lilongwe for interrogations.

The graft-busting body has been investigating a Malawi police food supply contract that was awarded to a firm owned Karim, called Pioneer Investments.

The leaked report by ACB alleges that the head of finance of Malawi’s police, Bottomani, and Karim had “connived” to award Pioneer Investment a contract to provide 500,000 food ration packs.

Days after the contract was signed, Pioneer Investment allegedly asked for a change to the agreed price from MK2.3 billion to nearly MK2.8bn – the report says the change was fraudulently approved by Bottomani.

When Karim was paid for supplying the food ration packs in 2016, he allegedly deposited 145m kwacha into a DPP bank account that is reportedly managed by President Mutharika.

But following a public outcry on the MK145 million donation, the DPP was forced to give back the donation to Karim, and ACB went ahead to clear Mutharika, saying he did not personally benefit from the money deposited into his account.

Motors Limited) on July 31 2017 under order number 318712 were a week later registered in Mutharika’s name and a proxy,

State House press secretary Mgeme Kalilani said the vehicles belonged to the party and not the President, a similar refrain that was dangled when Mutharika was asked to explain the MK145 million donation

Like it? Share it!
Mystery fire guts down Malawi Information Minister Mussa house, car < Previous
Rescuing Malawi’s teenagers from early marriages with village clinics Next >
Recommended stories you may like: