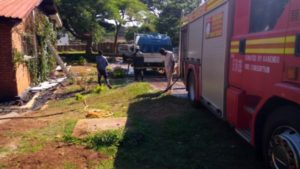 According to sources there were no reports of injuries, but the loss of property including the car as the cause of the fire is not yet established, but fire fighters rushed to the scene.

The Office of President and Cabinet had bought him the brand new Toyota VXL which he took delivery three days ago.

Sources at the scene added that the fire fighting engine developed a fault on its way.