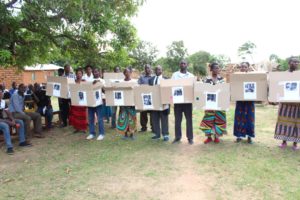 This was said on Tuesday 4th November 2018 during elections of Six customary land committee at group village headman Ching’amba at Senior Chief Lukwa in Kasungu district.

According to Charles Vintulla ,Spokesperson for the Ministry of Land,Housing and Urban development, Government is supporting the customary land law since it protect people from loosing their lands especially women

Andrew Mkandawire ,Project Officer at OXFAM narrated that the project is aimed at empowering women and the less privileged to own their land through the Customary Land Act

The first ever customary land act was elected in Phalombe  and the project which also promote gender equality is being implemented by Oxfam ,CEPA and Landnet,it started in 2017 and is expected to end in 2019 as it is being funded by European Union.

Like it? Share it!
Rescuing Malawi’s teenagers from early marriages with village clinics < Previous
District political leaders  crucial in implementing the new Political Parties Act-CMD Next >
Latest News From Malawi
Headlines From: The Maravi Post