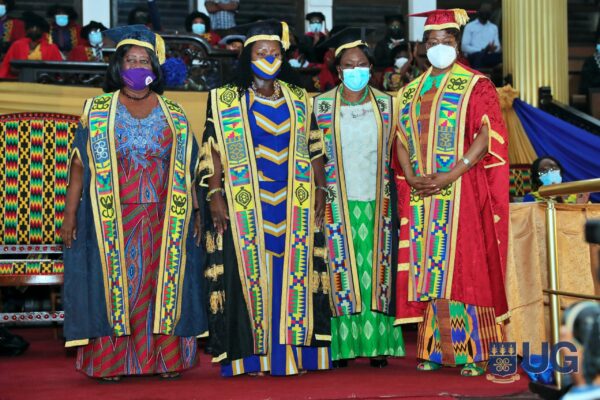 History has been made at the University of Ghana, the country’s first public university where its top four management positions have been occupied by women.

The top positions currently being occupied by women are the Chancellor, chairperson of the University Council, vice-chancellor and the Registrar.

The university had its first female vice chancellor getting inducted officially into office this week.

That feat was achieved by a linguistic professor, Nana Aba Appiah Amfo who was earlier acting before her confirmation.

Prof. Nana Aba Appiah Amfo was on October 26, 2021, inducted into office as the 13th Executive Head and First female Vice-Chancellor of @UnivofGh at a colorful ceremony held at the Great Hall, Legon.#UGVCInduction#GoToUniversity@univers1057fm_ pic.twitter.com/bsldiEUGzp


Professor Amfo is the first woman to take up this role since the university was established in 1948.

She had previously occupied the role of Pro-Vice Chancellor before her latest appointment, sealing the quartet of an all-female leadership at the University.

During the investiture of the Vice Chancellor, the Chancellor Mary Chinery-Hesse, who is also the first woman to occupy that position said the feat achieved by Professor, Appiah Amfo as the first female Vice-Chancellor in the history of the university is admirable and must be greatly celebrated.

“I can assure you that in 1959 when I matriculated at this university, that a woman will be sworn in as a Vice-Chancellor would have been considered far-fetched. Nana Aba, you have smashed a major glass ceiling at no mean institution other than the University of Ghana.” she said.

The new vice chancellor said in a speech that “Other public universities went ahead of us in this advancement in gender equality, but when the University of Ghana did it, we did it in a comprehensive style.”

Prof. Amfo in her inaugural speech promised to create a culture that promotes research, teaching and learning, administrative processes and extension activities driven by technology and anchored in humanism. #UGVCInduction#GoToUniversity@univers1057fm_ pic.twitter.com/sN0S7pZz0u

Professor Amfo is the youngest female to head a public university in Ghana  as she joins the likes of Professor Rita Dickson who is currently the vice chancellor of the KNUST and  Professor, Naana Jane Opoku-Agyemang who years ago achieved that feat at the University of Cape Coast.

Ghana’s President, Nana Akufo-Addo who was the special guest of honour at the event promised to support the new leadership realize their dreams for the institution.

Guest of Honour, President @NAkufoAddo pledged the continued support of Government to the progress of the University. #UGVCInduction#GoToUniversity@univers1057fm_ pic.twitter.com/TEYCFi7t65

Like it? Share it!
Herders disregard restrictions on open grazing < Previous
Start-up in Cameroon offers new hope in the fight against plastic pollution Next >
Latest News From Malawi
Headlines From: The Maravi Post