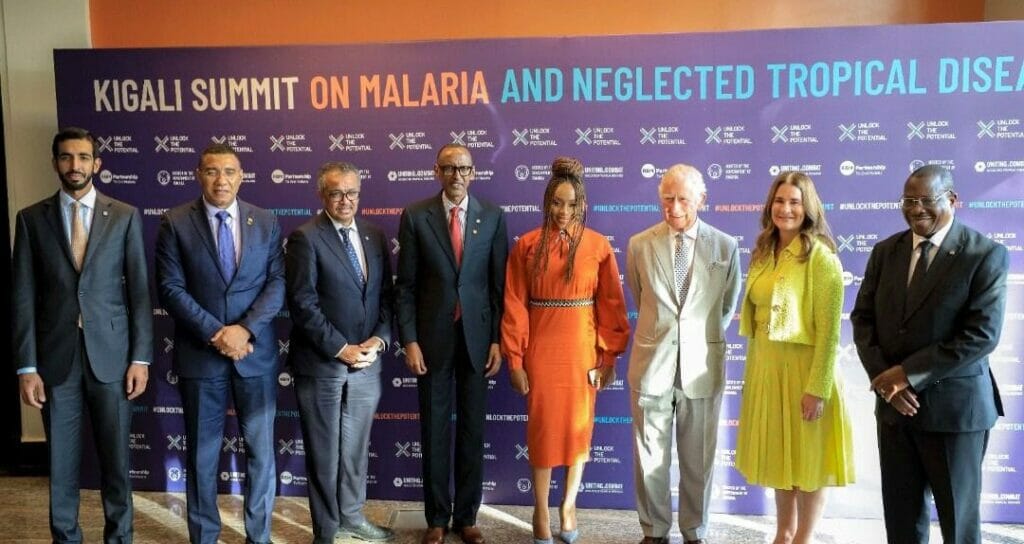 The Kigali Summit on Malaria and Neglected Tropical Diseases (NTDs) concluded today with Heads of State and Government from Commonwealth countries
signing and adopting the Kigali Declaration on NTDs, and reaffirming their commitment to ending malaria by 2030.

In recent years, Commonwealth countries have committed to reducing the burden of these largely preventable and treatable diseases. In 2018, leaders pledged to halve malaria across the Commonwealth by 2023, to eliminate blinding trachoma by 2020, and
to combat other mosquito-borne diseases.

Global efforts to fight malaria have yielded impressive results. An estimated 10.6 million malaria deaths and 1.7 billion malaria cases were averted from 2000 to 2020. Twenty-six countries reported fewer than 100 indigenous cases of malaria in 2020,
up from just 6 countries in 2000. Since 2015, 9 countries have been certified as malaria-free by the WHO Director-General.

There has also been substantial progress in the fight against NTDs. Forty-six countries have eliminated at least one NTD and, between 2015 and 2019, more than 1 billion people were treated every year for one or more NTDs. In the period 2010 to 2020,
the number of people requiring an NTD intervention was reduced by 600 million. Cases of African trypanosomiasis have fallen by 90% over the last 10 years, and only 15 cases of Guinea worm disease were reported in 2021 globally, compared to 3.5
million cases in the mid-1980s.

The global toll of malaria and NTDs remains staggering, however. In 2020 alone, an estimated 627 000 people died of malaria, and there were 241 million new cases of the disease. And despite reaching several important NTD milestones in many countries
– including the elimination of transmission of dracunculiasis, onchocerciasis and yaws, and the elimination of human African trypanosomiasis, lymphatic filariasis, rabies and trachoma as public health problems – more than 1.7 billion
people still required treatment and care for NTDs in 2020.

Progress towards the 2023 malaria target for Commonwealth countries, as well as the 2030 targets of the WHO global malaria strategy, remains off track. About half of the world’s population is still missing out on the services they need to prevent, detect and treat the disease. Similarly, the targets set out in WHO’s
NTD road map for 2021–2030 also face severe risk due, in part, to disruptions caused by the COVID-19 pandemic.

During the COVID-19 pandemic, most malaria-endemic countries experienced moderate disruptions to malaria services, and some countries saw delays in the delivery of insecticide-treated net (ITN) campaigns. During the first year of the pandemic, disruptions
to malaria services contributed to a marked increase in malaria cases (14 million) and to at least two thirds of the additional 69 000 deaths recorded in 2020 compared to 2019.

NTD programmes, especially community-based interventions such as preventive chemotherapy campaigns, were among the most severely and frequently affected across the spectrum of health services. The number of people receiving treatment for a neglected
tropical disease fell by one third in 2020 due to health service disruptions caused by the pandemic.

What is needed to reach global targets

“Investment in primary health care will help us to fight malaria and NTDs in a better way,” said Dr Tedros. “Primary health care is not just about institutions and facilities. It is about community empowerment and engagement, especially
with the involvement of youth,” he added.

Increased domestic financing is critical, complemented by the engagement of new partners and donors, more international funding and the successful replenishment of the Global Fund.

Africa and Asia carry the highest burden of both malaria and NTDs and, as such, a continent-wide response will be required to galvanize political and societal commitment and facilitate greater regional coordination and cross-border collaboration between
countries. Youth engagement and empowerment are also key to ensuring that the next generation of health practitioners and global health leaders is able to take the lead in ending long-standing disease burdens.

Participants in the Kigali Summit also emphasized the need for innovative tools and strategies to tackle malaria and NTDs. Innovation is needed, for example, to stay ahead of emerging biological threats such as drug and insecticide resistance and
to address the growing inequalities and barriers in access to health services.

Innovative tools should benefit as many people as possible. In October 2021, WHO recommended the broad use of the world’s first malaria vaccine. If introduced widely, the RTS,S vaccine could save tens of thousands of children’s lives every year. However, production capacity for the
malaria vaccine currently falls far short of demand.

WHO welcomes today’s announcement from GSK that it plans to double production of the adjuvant used in the RTS,S vaccine. GSK also reaffirmed
its commitment to supply albendazole until lymphatic filariasis and soil-transmitted helminthiasis are eliminated as public health problems, and announced that the donation of this medicine will be extended to a third NTD, cystic echinococcosis.

The Kigali Summit also saw a pledge from Novartis to invest US$ 100 million in R&D to combat several NTDs – including Chagas disease, leishmaniasis and dengue fever, in addition to cryptosporidiosis – and an additional US$ 150 million
in next-generation antimalarials and in an optimized drug formulation for infants.

These commitments were complemented by pledges of US$ 1 billion from Pfizer to the International Trachoma Initiative and US$ 80 million from the Wellcome Trust for R&D in snakebite treatments and additional NTD research.

Renewed efforts and commitments are needed by Member States, partners and all stakeholders at the global and local levels to ensure that the vision embodied in the WHO global malaria strategy and NTD road map becomes a reality by 2030.

Like it? Share it!
Colombia’s landmark Road Safety Law could save countless lives < Previous
Libyan residents face water shortage Next >
Latest News From Malawi
Headlines From: The Maravi Post