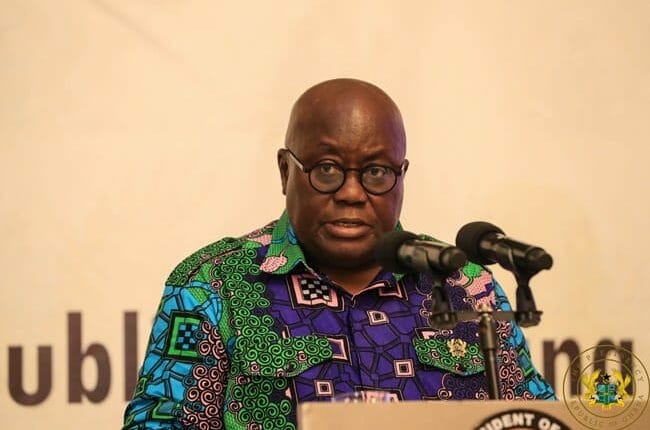 
Ghanaian President, Nana Addo Akufo-Addo was booed by disenchanted Ghanaians when he mounted the stage to address the Global Citizen Festival hosted in the West African country.

President Akufo Addo walked on stage to deliver a speech on Saturday only to meet many of the revellers chanting for him to leave the stage.

A section of the crowd went on the clap while shouting ‘away’. However, the president continues with his speech as scheduled with those shouts eventually going down.

Speculations are rife that many of the revellers are not happy with the current state of the economy.

Videos of the event held at the independence Square event have since gone viral as Ghanaians took to social media to comment on the incident.

Another viral video also showed President Akufo-Addo being booed when he asked the revellers whether they were enjoying themselves at the concert after giving his speech.

President Akufo Addo started off his speech with, “Ladies and gentlemen, I extend a hearty Akwaaba, our word of welcome, from a very hospitable people. To all of you, who have come from afar and wide, to our vibrant city of Accra, Ghana’s capital, to join us on this great occasion.”

He addressed the impact of climate change and the Russian-Ukraine war on the economy of Ghana and the world.

p dir=”auto”>Akufo Addo challenged the youth to be creative and fearless in finding solutions to world problems.

Many have called the crowd’s reaction brazen as no statesman has received this kind of reaction.

The event which took place in Accra, Ghana was aimed at bringing together artiste and world leaders to achieve the policy agenda focused on empowering girls and women, defending the planet and creating change.