You are here: Home » Lifestyle » Hundreds at funeral of well-known activist in Kyiv

Hundreds at funeral of well-known activist in Kyiv

Hundreds of mourners gathered in Kyiv on Saturday for the funeral of a well-known activist who took up arms against Russia’s invasion. The mourners for Roman Ratushnyi, 24, included friends who had protested with him during months of demonstrations that toppled Ukraine’s pro-Russia leader in 2014 and who, like him, defended Ukraine after Moscow’s invasion. The arc of his shortened life symbolized that of Ukraine’s post-independence generations that are sacrificing their best years in the cause of freedom. First, with defiance and dozens of lives against brutal riot police during Ukraine’s Maidan protests of 2013-2014 and now with weapons and even more lives against Russian troops. “Heroes never die!” friends, family and admirers shouted in Ukrainian as Ratushnyi’s coffin was loaded aboard a hearse on a square in the Ukrainian capital, now decorated with destroyed Russian tanks and vehicles. Their charred hulks contrasted with the shiny gold domes of an adjacent cathedral where priests had earlier sung prayers for Ratushnyi, who was well-known in Kyiv for his civic and environmental activism. From the square, the hundreds of mourners then walked in a silent column behind his coffin to Maidan Nezalezhnosti, or Independence Square. The vast plaza in central Kyiv gave its name to the three months of protests that overthrew then President Viktor Yanukovych in 2014 and which helped fuel the political and patriotic awakening of Ukrainians born after independence in 1991. 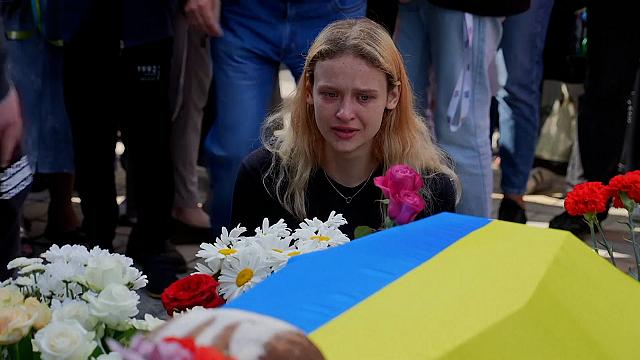 Like it? Share it!
Members of the Maasai community in Kenya support Tanzanian Maasai over controversial eviction < Previous
Nigerians, Remember Sowore! By Martin White-Ufuah Next >