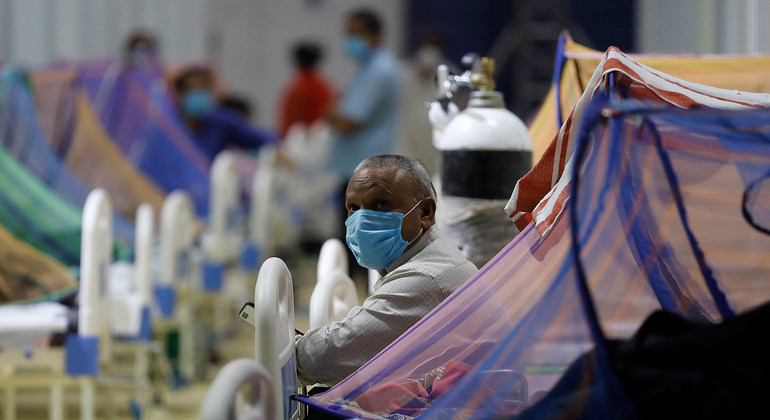 In the last 24 hours, India registered 3,915 coronavirus deaths and 414,188 cases “which is the highest daily case count recorded by any country in the history of COVID-19 pandemic”, said Yasmin Ali Haque, UNICEF Representative in India.

“UNICEF is of course very concerned about this deadly daily surge in new cases”, she added. “This wave is almost four times the size of the first wave and the virus is spreading much faster. On average, there were more than four new cases every second and more than two deaths every minute in the last 24 hours.”

Geneva Palais briefing note on the impact of the deadly COVID-19 surge on children in India, and increasingly in the region https://t.co/dg9KqN2e1N

The UN official noted that health facilities have been overwhelmed by COVID-19 patients, amid reports that pregnant women have struggled to find the support they need to give birth.

“With 27 million births and 30 million pregnancies every year, life-saving services to help women give birth are critical in India” Ms. Ali Haque said. “What is happening in India should raise alarm bells for all of us. The pandemic is far from over. COVID-19 cases are rising at an alarming rate across South Asia, especially in Nepal, Sri Lanka and the Maldives.”

Very low levels of vaccination in most South Asian countries – less than 10 per cent in India, Sri Lanka and Nepal – were also adding to concerns of the virus spiralling even further, the UNICEF representative noted.

UNICEF is also concerned that the COVID-19 surge has also led to “dire consequences” for a greater number of children than during the first wave of infections, with access to essential health, social, protection and education services constrained.

“Children are facing mental health issues and are at greater risk of violence, as lockdowns shut them off from their vital support networks”, Ms. Ali Haque said.

Although there is no indication that the proportion of children getting infected is any different to the first wave, “the numbers are far greater”, she insisted. “We’re seeing the virus entering a household; it just takes one member of the household to be affected and it seems to spread like wildfire throughout the family.”

This has been accompanied by a likely spike in illegal adoption pleas on internet platforms by families desperate to find homes for orphaned relatives, prompting fears of child exploitation, the UN official said.

Authorities were “beginning to pick up on numbers” of vulnerable children, the UNICEF official continued, in a call to promote family tracing and speedier help for destitute families.

“When we see that children are being orphaned and we do see that there is a lot of trafficking of children which is reported, children go missing, those systems are beginning to pick up on numbers”, she said.

There is a greater alertness around any family seeing that children (that) have been affected get reported…While there isn’t enough data yet, we can see that illegal adoption pleas have surfaced on social media, making these orphans vulnerable to trafficking and abuse.”

Like it? Share it!
Nigeria: Several university students kidnapped in fresh attack < Previous
Malawi Congress Party humbled! Mathanga, Kunje legally confirmed as Mec commissioners Next >
Recommended stories you may like: