You are here: Home » Regional » Mummies with golden tongues found by archaeologists 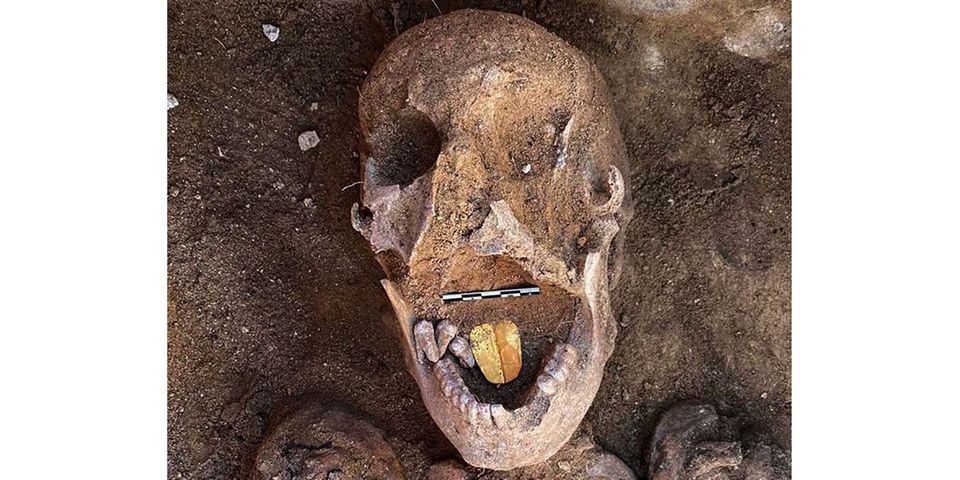 
An Egyptian-Dominican archaeological mission working near Alexandria has discovered mummies from around 2,000 years ago bearing golden-tongued amulets, the Egyptian authorities said on Wednesday.

“The mission discovered 16 tombs cut into the rock… in the temple of Taposiris Magna, west of Alexandria” in northern Egypt, the antiquities ministry said in a statement, adding that the burial technique was widespread in the Greek and Roman periods.

The tombs contained several mummies that were “poorly preserved” but bore “gold-leafed amulets in the shape of a tongue”.

The amulets were placed in the mouths of the dead “to ensure they could speak in the afterlife”, according to the ministry.

Two of the mummies were of particular interest to the researchers, mission chief Kathleen Martinez was quoted as saying in the statement.

One had “bandages and parts of cardboard — layers of glued, stuccoed and painted linen fabric that enveloped the mummy — decorated with gilding with the effigy of Osiris”, the Egyptian god of death and the underworld.

The second bore a “crown decorated with horns and a cobra… as well as a necklace with a pendent in the form of a falcon’s head”, representing the god Horus, the son of Isis and Osiris, according to the statement.

The mission has been working to the west of Alexandria for several years, searching for the tomb of the legendary Ptolemaic Queen Cleopatra — though doubts remain among archaeological circles about the likelihood of finding it in the area.


The Ptolemaic dynasty was of Greek origin and ruled Egypt between 323 and 30 BC.

It was the last pharaonic dynasty before Egypt came under Roman rule, and Cleopatra was its last sovereign.

Like it? Share it!
Former Ugandan rebel leader convicted of war crimes < Previous
US President Biden ends support for Saudi’s Yemen war in foreign policy shift Next >
Latest News From Malawi
Headlines From: The Maravi Post