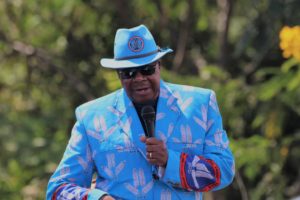 President  Peter Mutharika says his government is committed to bringing more development projects across the country if voted back into power in the forthcoming tripartite elections.

Mutharika was speaking Saturday in Lilongwe during a whistle-stop tour at Chingondo Primary School Ground in the area of Traditional Authority (TA) M’bwatalika.

He said he promised a lot of development projects in his 2014 manifesto and most of which has been fulfilled.

“Among others, my government has constructed durable roads, hospitals, bridges and community technical colleges across the country.

“DPP is ready to bring more of these development projects in the next five years; which, among others, include cancer facilities, schools, electricity, tarmac roads and pure running water,” Mutharika said.

Mutharika said that he will continue to fight food insecurity across the country by maintaining the Fertiliser Input Subsidy Programme (FISP).

“My enemy is poverty; that is why my government centres on ensuring food security in the country. In this regard, I will continue to run FISP whose beneficiaries are the poor.

“I am against the Universal Fertiliser Subsidy Programme that other parties say they will replace FISP with because the former initiative allows the rich to also benefit from it.

“I believe, we cannot fight poverty with this initiative because then the rich will continue to benefit more than the poor,” Mutharika said.

He said leading a country is not a simple thing; as such, it needs an experienced leader like him to promote development and not someone who will just conduct an experiment.

From Chingondo, the President stopped at Ming’ongo Trading Centre in TA Kalolo and Phirilanjuzi in TA Masumphankhunda where he also promised thousands of people of the DPP’s continued promotion of people’s livelihoods.

“I have observed that the energy sector is encountering several challenges. I also know that some of our roads are still in bad shape and there is no clean water in some areas. I will, thus, work on these when voted back into power,” Mutharika said.

President made the last stop at Mitundu Trading Centre in TA Chingala where thousands of people had gathered to show support to Mutharika and the DPP.

TAs M’bwatalika and Kalolo hailed Mutharika for bringing various development projects to their areas saying people’s livelihoods have changed since he ascended into power in 2014.

“I will be failing if I do not acknowledge the President’s efforts in developing my area.

“I can boldly say that there is food security in my area thanks to, among others, Social Cash Transfer

and FISP programmes that government introduced.

“I want to assure the President that I will continue to support him to ensure the country’s continued development,” TA M’bwatalika said.

TA Kalolo particularly hailed Mutharika for introducing the decent housing programme popularly known as Cement and Malata Subsidy saying it has enabled the ultra poor to live in good houses.

“The Cement and Malata Subsidy Programme that President Mutharika initiated has changed a lot of lives,” TA Kalolo said.

Like it? Share it!
Chilima questions President Mutharika’s wisdom on promotion of 7,000 police officers without readily perks…says elections ploy < Previous
Sri Lanka explosions: 137 killed as churches and hotels targeted Next >
Latest News From Malawi
Headlines From: The Maravi Post