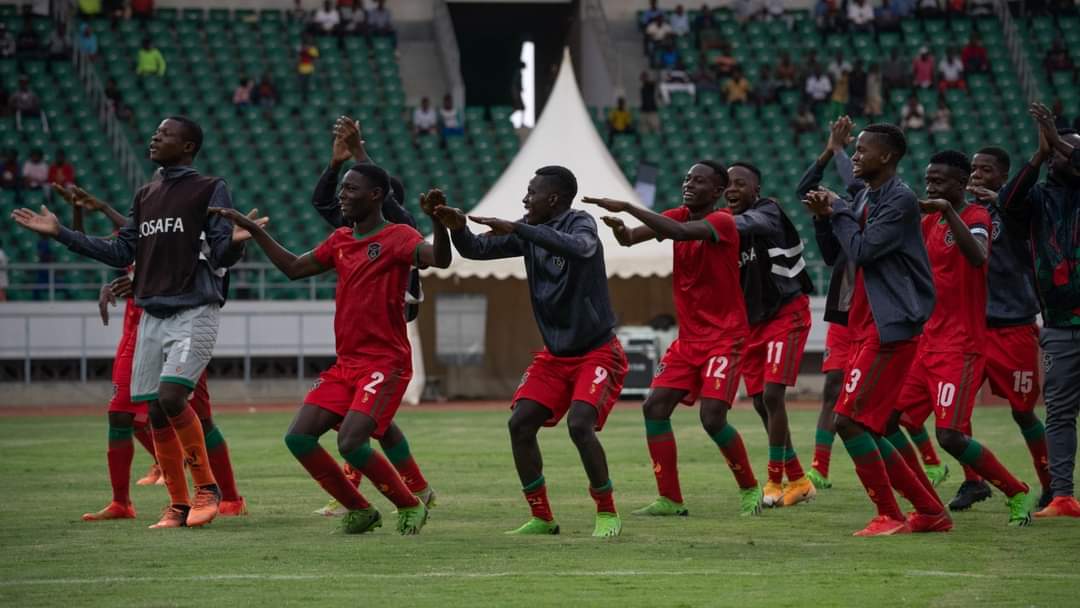 The junior Flames despite playing entertaining football in the first half,they lacked composure and marksmanship on goals hence the visitors Junior Brave Warriors opened the score sheet at 27th minute through Dorian Nanuseb after defensive error in Malawi defence.

Malawi continued attacking dangerously until at 37th minute when Captain Blessings Kanowa was fouled in the penalty box and the referee from Mozambique Wilson Muiange pointed on the spot.

Blessings Kanowa however didn’t make any mistake than sending the ball into the net to put the game at level.The team continued displaying beautiful football as they searched for the winning goal which would send them into the semifinals from group A.

As it was the case in Botswana game,Malawi failed to utilize the set pieces they got in the game, playing 12 corner kicks and numerous free kicks but nothing came out from that.

As the game was thought it would end one apiece Derklek Msakakuona, head coach made several changes to make sure his job is saved.

He brought in Webster Mzunda at 75th minute, this sub paid dividend to Msakakuona as the boy did not need more than 8 minute in the field of play to score vital goal which sent the home fans into raptures.

The victory took Malawi to 4 points in group A from 2 games and ensured them to finish in top 2 with either Botswana or Namibia who are to slug it out for the other semifinal slot on Tuesday.

The Junior Flames were wasteful, missing a lot of chances.

In a post match interviews, Derklek Msakakuona, Malawi U17 coach said there was an improvement in Sunday’s play against Namibia comparing to that against Botswana on Friday.

“We played well today,there is great improvement, a great one for that matter though we are always coming from behind.We have some days before semifinals we prepare our boys mentally for the game.

“Let me thank the supporters that came in large numbers they helped to motivate the players”, Msakakuona joyfully said.

Two teams that face in the final of this year’s competition,which forms part of the region 5 games Lilongwe 2022,will qualify for the TotalErnegies U17 African Cup of Nations Algeria 2023 slated for April.

Group B second round of games will be played on Monday,Mozambique will battle it out with the Amajita of South Africa from 1500hours,it is a must win for the Young Mambas as they lost their opener 1-0 to Zambia.

The Amajita, however, are abit safe after thumping Seychelles 11-0 in their opener,they can seal a semifinal slot with just one win.