You are here: Home » Opinion » Why Lagosians Are Boycotting The Ongoing Local Council Elections By Kunle Wizeman Ajayi

Apparently, the ongoing Lagos State Local government Council Elections today July 24th is marred with apathy by voters to the extent that APC and government officials are being filmed on air begging citizens to come out to vote. Even in the highly politically conscious Agege and Lagos Mainland; people have refused to come out to vote. Same in Kosofe; Lagos Island; Eti-Osa; Ikorodu; Badagry; Ikeja; Alimosho; Ifako/Ijaiye; and Oshodi/Isolo. People usually vote when they believe in same or and belive same would at least express their political and social wishes. Yet, there is need to briefly show some vicious reasons why Lagosians decided not to come out to vote in today’s polls.

First, the July 24th Lagos LG elections is indeed not an election. Elections are broadsheets of real democracy. Not a one-party rubbish where the date of elections as well as the appointments of the electoral umpires would be done solely by the APC. Since 1999, the Lagos State Independent Electoral commission (LASIEC has been a conspicuous appendage of the Tinubu/APC hegemony. So people already know the today’s polls are rigged already.

Also, it pays the Lagos ruling class that voters should not come out. So, they use extreme violence to make people fear to come out. All through yesterday, the CSP  Yinka Egbeyemi-led Lagos Task Force has been in a war-mongering 17-vans and armoured motorcade molesting people and instilling fears through sirens and open brutality. 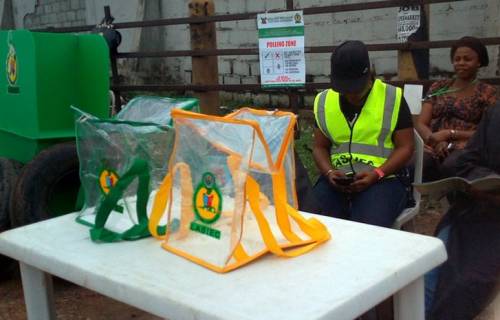 Aside the tyrannical moves, LASIEC has been openly disenfranchising Lagosians. A good instance is at Shogunle in Oshodi/Isolo. Most units have been eliminated and the voters put in jeopardy. There are no polling units in Babayonju; Sadiku; Anthony Obe; and Osemene. In Ogundele Primary, only one out of three units is provided. In Bode Onifade; only one. Same as Bello street. No polling unit in Jacob Taiwo. Only one in Tiwalade out of two. This is the same tactics as can be noted in Tinubu’s viral election rigging video described as “blockade”. Anywhere voters stubbornly vote against APC, another horrible and violent tactics using thugs called “Korope” would be applied. So, the LG elections is at best a charade dictated from Bourdillon under the APC hegemony.

Meanwhile, the level of poverty in Lagos is another reason no one is ready to go all out to exercise the voting rights. Only the rich enjoys in Lagos. The poor are getting vastly poorer and also paying heavy taxes through their nostrils. So, no one will be compelled to come voting even of the politicians share #1000 each as they always do. The Naira is devalued and utterly useless in the face of high cost of foods and goods. So, the pittance bribes are seemingly outdated.

However, Lagosians would have loved to massively vote alternatives who are truly progressive and have the audacity to challenge the status quo. But these radical parties have been excluded from the elections by LASIEC and shamelessly by the courts. The African Action congress (AAC) is one of such parties that have been illegally excluded from the elections by LASIEC. The issues are before the courts now and the party will fights the odds by any means necessary. The National Conscience Party (NCP), Socialist Party of Nigeria (SPN), and even the liberal Young Democratic Party (YDP) are all yanked off the ballots. Tinubu and the APC IS afraid of the rising movements and it’s radical positions on economy, politics , and governance. This is one reason #Endsars was basically drowned in blood in Lagos.

In all, boycotting elections have its implications plus and minus. The plus is that it is a massive rejection of today’s sham. It is also a rejection of the Tinubu/APC madness. But it is a minus as the rulers are shameless and they would simply move on after this. They would even shamelessly come up with fake pictures and reports of popularity. They will even roll out the drums and celebrate tonight.

As we want a new Lagos nay a new world, we must bear it in mind that we cannot birth such if we do not smash this rotten old and present. To do such, all oppressed people and parties need radical unity and actions. With such, we have a greater understanding that Lagosians and all working people, inspite of this hopelessness and oppressors having a free day,  will have the ever happy and greater last laughs!

Like it? Share it!
Clashes at Paris protest over virus passes < Previous
Lagoon in Argentine Patagonia turns pink due to pollution Next >
Recommended stories you may like: