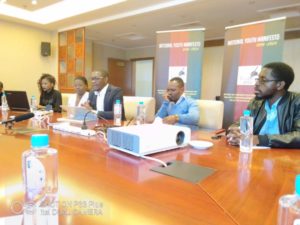 LILONGWE-(MaraviPost)-The grouping that ran a national elections campaign, code-named Youth Decide 2019 to drive up the youths to be active participants ahead of just ended elections on Friday demanded 30% inclusion of young people in President Peter Mutharika’s parastatal, cabinet appointments.

Kajoloweka added that in the next 100 days wants the new leadership making sure that councils should include nomination of youth representatives as special interest groups, “To will translate into 35 non-elective youth councilors”.

He however expressed dismay over 2019 Tripartite elections results saying, “Its total betrayal to public trust”.

The thrust of the campaign is to stimulate positive energies and participation of Malawian youth in shaping the country’s development and governance agenda through the 2019 electoral cycle.

The campaign derives from the conviction that the 2019 elections provides a golden opportunity for the Malawian youths who are in majority to come together to reflect on the country’s current state of development and drive their aspirations through organized engagement throughout the 2019 political window.

Like it? Share it!
Shocking; Nigerian police arrest Enugu pastor for allegedly impregnating 20 church members < Previous
Chilima petitions High Court to nullify Malawi’s May 21 polls results Next >
Recommended stories you may like: