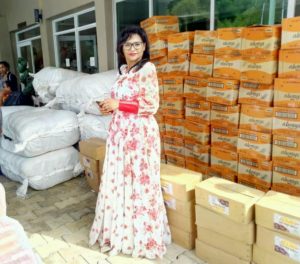 One of the concerned Malawians on a mission to ease the suffering of flood victims, Abida Mia, has made a special appeal to people of goodwill to urgently donate maize to feed the floods survivors in the Shire Valley as reports of malnutrition begin to trickle in.

Speaking last Saturday in Blantyre during the “Reach out and touch to flood victims” charity drive, Mia updated on how the situation in some camps in Chikwawa and Nsanje was getting out of hand with reported cases of people dying after suffering from hunger related ailments.

She sadly shared about some two cases of people who had passed on at a camp in Chikwawa district after as a result of diseases caused by acute hunger and malnutrition.

“I’m appealing for urgent maize donations so that the people who are in dire need of food relief can be reached out as quickly as possible,” she said.

The special appeal comes after the Mia family through the Sidik Mia Foundation charity machinery, has in the past weeks spent over K26 million to purchase maize and other food relief, which they have distributed to the flood victims the two worst hit districts.

Cases of malnutrition is said to be worsening among children in the camps and evacuation centres, a situation which Abida Mia described as “very disheartening”.

Other vulnerable groups that are mentioned to have badly been affected are those living with HIV and other chronicle diseases.

There are sad reports of people who have been evacuated to dry grounds and are currently  facing a high risk of starvation because of the unavailability of food.

One good example of such places is Nsanje North in the East Bank, where roads are  impassable as bridges are either damaged or completely cut off and in the process, making accessability to such places totally impossible.

In her appeal for urgent supplies of maize, Abida Mia emphasized a point that, if other donors would like to go themselves to donate, she would be very happy to direct them to places where the need for food is more urgent.

She elaborated: “I for one have been there and would be very much happy and willing to direct them where to go as such a thing would help in reducing repetition of donating the food in just one place but rather will help to ensure that other places that haven’t been reached are also eventually reached.”

Apart from causing loss of lives, the devastating floods had also destroyed houses and other property, including washing away vast acres of fields in which stood a promising bumper harvest of the staple food maize and other crops.