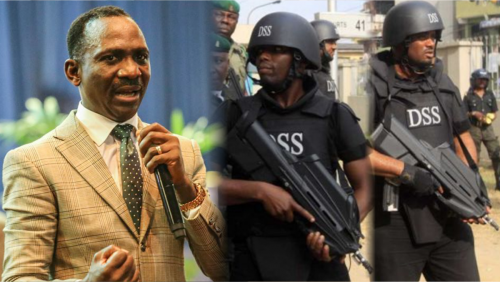 How does Pastor Paul Enenche pray at night? How is he untroubled by the misery of innocent parishioners who continue to languish in DSS’ cells enduring estrangement and possible torture for simply daring to speak up against bad leadership? And what efforts are underway on the part of his church and leadership to correct this most terrible error of judgement? Pastor Paul Enenche owes remains responsible for the fate of those young men and women, and no virtue signalling on earth can displace his duty of care to them.

When I heard news of the arrest of the five worshipers by Pastor Paul Enenche’s Dunamis Gospel Church in its Headquarters, Lugbe-Abuja, my first reaction was to discountenance it as the popular man of God is one of just a handful of clergy-men that have gone without irritating controversy. In fact, Pastor Paul Enenche who hails from the troubled Benue state has severally used his platform to voice out against his people’s plight and also frequently organises redemptive prayers for the state of the nation.

But apparently, five individuals wearing ‘Buhari-Must-Go’ shirts and who had answered the ‘alter-call’ were detained by the church’s security and handed over to the DSS. As I write, all five individuals remain unhappy special guests of honour with the DSS. I guess the church isn’t a house of refuge after all again.

The choice of the DSS is a curious call. The DSS are only ever involved where a conspiracy/action that threatens the sovereignty of Nigeria is afoot. So the church must have been reasonably convinced that all five church-comers who responded to its own alter call were threats to the integrity of Nigeria. An administrative church member who spoke to newsmen on condition of anonymity explained the church’s position thus:

“Those people sneaked into the church, I used the word sneaked because the church was not aware of their intention, no department in the church knew anything. They even came out for altar call and before you know it we saw that they had ‘Buhari must go’ T-shirts and they were recording people making it seem as if the church planned the protest. We had to hand them over to security operatives because we believe in three things. It is either they were sent in by agencies to make sure that the church is at loggerheads with the government or either make it seem like the church sponsored the protest. Third is even if they have a genuine protest, the church is not the right place to go. If there is a problem in the country, the duty of the church is to pray that God help our leaders. We have handed them over to the authorities for investigations.”

There is an absolute lot to unpack in the pregnant assumption of the Dunamis Church leader’s statement above, and in the absence of an official church position, one can safely take it to indeed reflect the church’s fear and apparent cowardice. Fear because the Church considers itself vulnerable enough to be setup by the mere appearance of peaceful protesters in its premises and cowardice because you see, protest is a fundamental right and not a crime.

Far too many Nigerian churches have been cowered into servitude or outright subservience to the political status quo. The fear of entrapment encapsulated in the Elder’s words is an acquiescence to political labelling as a tool of oppression. Why else would written words on a shirt elicit such a strong reaction from the church?

In trying to avoid taking a political stand, the church ended up siding with the Nigerian Government against disaffected citizens who committed no crime known to Nigerian Law by registering their displeasure with the current leadership. Even if the church suspected it was being setup to take a fall, haven’t the unfolding facts in the matter shown their apprehension to be misplaced? What redemptive actions have the Dunamis church taken to see to the release of this innocent individuals whose disaffection with political leadership has been criminalized by a fascist government?

Granted, the church is not a protest ground and as such any political chanting or related action could (should) have rightly been construed as an overreach and a nuisance in which case the protesters should have been asked off the premises (shoo’ed off, even). THIS WAY, the church could have avoided taking a side in the matter. To have handed over said protesters to the DSS, the church made an indirect statement. Firstly, that it believes and accepts the government ’s position that legitimate protests against political leadership is a crime. And secondly, that the Dunamis Gospel Church International is not a safe haven for politically conscious members or attendees.

We are indeed living in troubled times and the timid feet of the Church today would bleed the heels of Jesus Christ all over again. In his earthly time, the Messiah was a bold critic of bad leadership and unperturbed by personal conveniences in the discharge of His duty. A man (read ‘church’) who has a clean conscience (read ‘slate’) ought to fear no condemnation. The church does not have a duty to go lengths to prove its inherent neutrality unless such an effort is intended to scurry political approval, or….simply depicts spineless-ness.

To avoid earthly recompense in the form of public opprobrium, the Dunamis Gospel Church International have the redemptive grace of bringing its influence to bear, not in exculpating the detainees where any REAL imputation of crimes can be made against them but to ensure that this protest-inclined parishioners are released. Dunamis Church and its hierarchy must watch the DSS’ handling of the matter to avoid vindictive penitence against the detainees.

Guilt over any further and continuous harm that befalls the detained parishioners falls squarely on the shoulders of the Dunamis Church and its leaders who betrayed the confidence of those individuals and handed them over to be unjustly crucified just like Judas’ betrayal of Jesus in the Garden of Gethsemane. The evocation of such unfaithfulness on the church’s part against its parishioners is reminiscent of Christ’s criticism of the tepid spiritless-ness of the present day Church who glory in seeking the patronage of the political class while condemning ordinary worshippers to the scorn of political jobbers.

The action of Dunamis Gospel Church International in this matter is simply NOT Christ-like. What would Jesus have done or how would he have reacted to a group of peaceful believers protesting against bad leadership? Too often, the Church, in words, pride itself as mirroring the life of Christ but are caught out by their actions which betray a need to serve personal conveniences as against bearing the cross of standing in the gap.