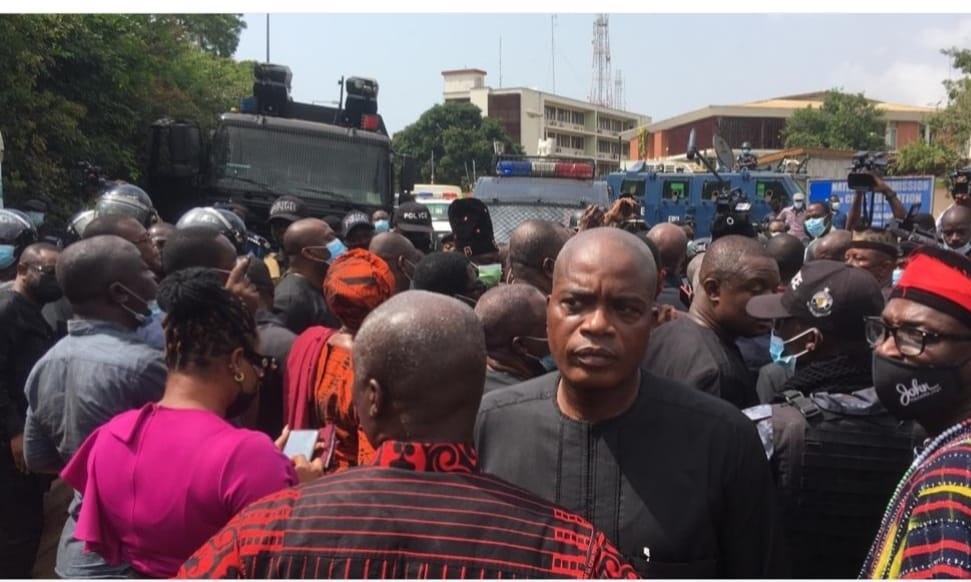 
Minority MPs in Ghana’s parliament are livid after clashing with police during a protest march to the Electoral Commission on Tuesday.

The minority MPs were marching to the headquarters of the Electoral Commission (EC) to challenge the results of the Presidential elections declared in favour of the incumbent Nana Akufo-Addo.

They were also demanding a recollection of some of the parliamentary results declared for the candidates of the ruling NPP.

But they were blocked by armed police who have mounted barricades to stop them from entering the premises of the EC.

The development led to physical exchanges between lawmakers and police personnel which led to some of the MPs being manhandled in the scuffle.

Minority leader Haruna Iddrisu condemned the EC boss Jean Mensa and her deputies for failing to receive the petition, warning that the minority will not accord the EC officers the needed respect when they appear before the next parliament.

In a statement however, the EC said it did not receive prior notification of the intended petitioning by the minority MPs , a claim the opposition MPs have disputed.

Meanwhile some CSOs have condemned the decision by the EC to go on a month long recess in spite of the protests that have greeted the declaration of the December 7 election results.

The CSOs have also appealed to the minority to resubmit the petition to the EC.

Like it? Share it!
China and Lending – Will Africa Suffer From a More Frugal Outlook? < Previous
Cameroon: Kids abandon classrooms, NGO moves in to help Next >
Recommended stories you may like: