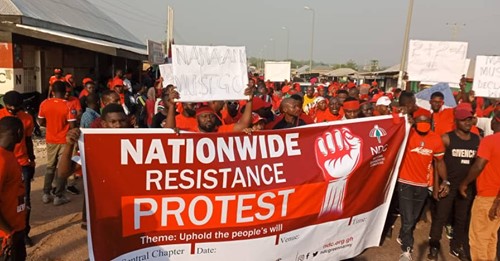 
Supporters of the opposition party, NDC in Ghana have clashed with the police as they continue their protests against the conduct of the December 7 elections.

They have been staging nationwide protests, challenging the declaration of the incumbent Nana Akufo Addo as President-elect.

The largest opposition party has also accused the Electoral Commission of vote padding and rigging to keep the governing party in power.

Hundreds of NDC supporters on Thursday morning marched to the EC headquarters, in the capital, Accra chanting slogans such as “No Mahama No peace”.

There were chaotic scenes as the aggrieved supporters burnt car tyres which compelled the police to disperse them with hot water.

The electoral violence in the West African country has so far claimed six lives.

The NDC flagbearer and former President John Mahama has initiated the process for an audit of the results, insisting that the party won the presidential elections and has majority of seats in the 275 house.

Pressure is mounting on the party to seek legal redress in it’s quest to overturn the election results.

Like it? Share it!
What Is Our Education Minister Still Doing In Office? By Olabisi Deji-Folutile < Previous
Nigeria reopens borders with neighbours for trade Next >
Recommended stories you may like: