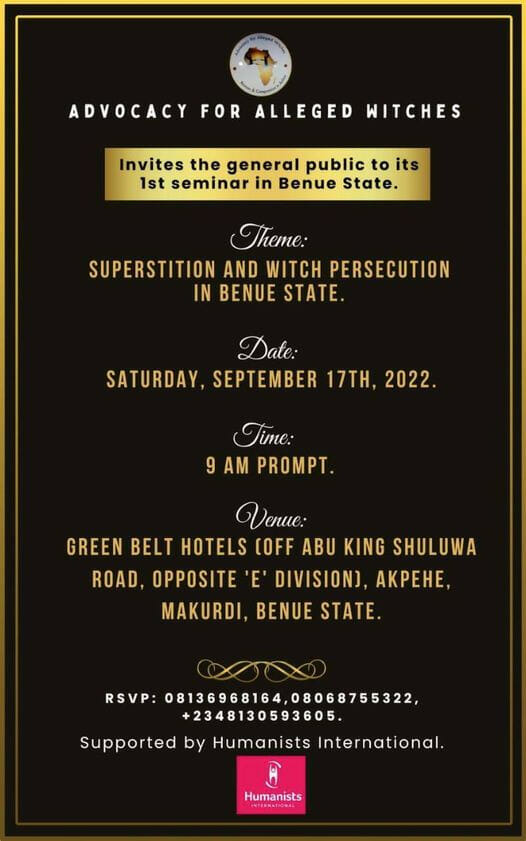 The Advocacy for Alleged Witches (AfAW) is organizing its first seminar on witch persecution and superstitions in Benue Central Nigeria. Benue is a hotbed of witchcraft imputation and witch hunting because belief in the occult force called Tsav among the Tivs is pervasive. To properly situate this historic event, a local advocate explains the significance of the meeting. He said: “This event is very important because it would allow us to understand the different perceptions of witchcraft and the various ways that alleged witches are persecuted in Advocacy for Alleged Witches AfAW is a humanist organization that campaigns to end witch persecution in Africa by 2030. As the advocate noted, “Witchcraft belief is a big issue in Benue! Everyone believes in it, and anything can be linked to it. As kids, it was normal to tag along this path, imbibe these superstitions and live in deep fear of occult forces”.

Witchcraft is popular and entrenched because people are socialized to believe, and not question witchcraft claims from childhood. And as adults, they find it difficult to abandon the superstitious mindset. People pass on these irrational beliefs to their children, perpetuating the cycle of ignorance, unreason, and misconceptions. These misconceptions are not innocuous sentiments; they drive abusive treatment of suspected witches. Incidentally, it is not everyone that is a target witchcraft accusation and witch persecution. A local advocate further states, “The most vulnerable, the people most likely to be accused of witchcraft, are the elderly. Aged people, who are perceived to have lived long while losing family members, children or grand children; those considered different/unusual, like those with autism, including atheists and members of the LGBTQ community”.

In Benue, alleged witches are believed to cause illness, death, and accidents. They are subjected to horrific abuses. A local source told AfAW that the “accused are often treated as horribly as can be imagined, but this depends on the scale of social frailty and vulnerability. A person who has people who could stand up and defend them would be less at risk than those who seem to have none like widows or orphans. When accusations originate from within the family, the accused are worse off, the support base weakens and the protection cover quickly disappears. The stigma and name soiling do much damage. They make suspected witches lose their humanity”. Witch hunting ended in Europe centuries ago but this wild and vicious phenomenon rages in Africa. An advocate in Benue explains why this is the case: “Witch persecution persists because religions, traditional, Christian and Islamic use witchcraft claims to manipulate people and attract followership and patronage. Knowing the cultural depths of this supposed evil, there are mass healing centers and crusades where people go. In these places, people want to hear that an uncle or mother-in-law or a husband’s girlfriend is the cause of the instability in their lives and that something can be done about it. Religion feeds that want”. Witchcraft belief is used to scapegoat individuals; incite persecution and violence against an innocent family or community member. In a recent incident, some youths attacked an elderly woman after consulting a local diviner who confirmed that the woman bewitched a young man who had cancer. Angry youths attacked and destroyed the woman’s house.

Family members were able to rescue the woman and took her to a safe location. In many cases, accused persons are not lucky. They are tortured to death or lynched by an angry mob. In some parts of Benue, witch hunters strangle or stone accused persons to death. They act with impunity. These atrocities continue because perpetrators are seldom punished. Victims of witch persecution and their families often reign to their fate because of the notion that justice would not be served or that efforts to ensure justice would lead to further victimization. The police expect victims and their relatives to come and lodge complaints before they could intervene in cases of witch persecution. Even when complaints have been lodged, the police often expect the complainants to bribe or mobilize them before they could arrest the suspects or investigate the incident. In situations where the cases are charged to court, the matter suffers so many adjournments. Victims or their families are forced to abandon their case.

On what could be done to end witchcraft accusations and witch persecution in Benue, a local source said: “Education could play a great part in changing the mindset of the people. Nowadays, any sickness is presumed to be inflicted through witchcraft. Maybe, people need to understand that there are other causes of diseases and misfortune that can be verifiable through scientific testing”.

Leo Igwehttps://www.maravipost.com
Leo Igwe (born July 26, 1970) is a Nigerian human rights advocate and humanist. Igwe is a former Western and Southern African representative of the International Humanist and Ethical Union, and has specialized in campaigning against and documenting the impacts of child witchcraft accusations. He holds a Ph.D from the Bayreuth International School of African Studies at the University of Bayreuth in Germany, having earned a graduate degree in Philosophy from the University of Calabar in Nigeria. Igwe's human rights advocacy has brought him into conflict with high-profile witchcraft believers, such as Liberty Foundation Gospel Ministries, because of his criticism of what he describes as their role in the violence and child abandonment that sometimes result from accusations of witchcraft. His human rights fieldwork has led to his arrest on several occasions in Nigeria. Igwe has held leadership roles in the Nigerian Humanist Movement, Atheist Alliance International, and the Center For Inquiry—Nigeria. In 2012, Igwe was appointed as a Research Fellow of the James Randi Educational Foundation, where he continues working toward the goal of responding to what he sees as the deleterious effects of superstition, advancing skepticism throughout Africa and around the world. In 2014, Igwe was chosen as a laureate of the International Academy of Humanism and in 2017 received the Distinguished Services to Humanism Award from the International Humanist and Ethical Union. Igwe was raised in southeastern Nigeria, and describes his household as being strictly Catholic in the midst of a "highly superstitious community," according to an interview in the Gold Coast Bulletin.[1] At age twelve, Igwe entered the seminary, beginning to study for the Catholic priesthood, but later was confused by conflicting beliefs between Christian theology and the beliefs in witches and wizards that are "entrenched in Nigerian society."[1] After a period of research and internal conflict due to doubts about the "odd blend of tribalism and fundamentalist Christianity he believes is stunting African development," a 24-year-old Igwe resigned from the seminary and relocated to Ibadan, Nigeria
RELATED ARTICLES
corruption