In his message commemorating the Day, Secretary-General António Guterres warned that countries across Africa are facing “a perfect storm”.

Yet despite these challenges, the top UN official reminded that Africa includes some of the world’s fastest growing economies with the potential to lead in the global energy transition.

To advance inclusive, resilient, and sustainable industrial development in Africa, he explained that multilateral cooperation is needed – along with bolstered public-private partnerships.

“A new financial architecture with greater access to finance and lower cost of capital is key unlocking investments at scale”, flagged the Secretary-General.

He underscored the need to “work collectively” to boost entrepreneurship, harness the potential of new technologies, expand opportunities for youth, women and girls, build climate resilience, and foster competitiveness and trade.

Moreover, he continued, “we must also work together to realize the objectives of the African Continental Free Trade Area, the African Union’s Agenda 2063, and the 2030 Agenda for Sustainable Development”.

Industrial development is critical for sustained and inclusive economic growth in African countries, underscored the UN.

By introducing new equipment and new techniques, industry can enhance productivity, increase the capabilities of the workforce, and generate employment.

And with strong linkages to domestic economies, industrialization will propel African countries to achieve high growth rates, diversify their economies and reduce their exposure to external shocks – substantially contributing to poverty eradication through employment and wealth creation.

The UN Industrial Development Organization (UNIDO) drew attention to the African Union Summit on Africa’s Industrialization and Economic Diversification, which kicked off on Sunday and runs until Friday.

The Summit aims to rally political momentum, resources, partnerships and alliances towards an Africa-Industrialization drive.

This coincides with the continent’s resolve to push structural transformation by leveraging Africa’s rich and diverse natural resources, while at the same time embracing advances in technologies, continental and global geo-socio-political trends and emergence of tradable services.

A worker repairs a wheel of a giant haul truck at a uranium mine in Namibia.

Within the framework of the Second Industrial Development Decade for Africa – from 1991 to 2000 – the General Assembly, proclaimed 20 November as “Africa Industrialization Day”.

Since then, the UN System has held events on that day throughout the world to raise awareness about the importance of Africa’s industrialization and the challenges faced by the continent. 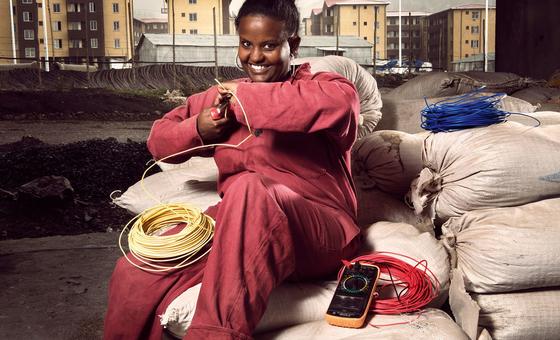