You are here: Home » Malawi » Malawi Govt to deal with lawbreakers including albinos-Inform Minister Mussa

Malawi Govt to deal with lawbreakers including albinos-Inform Minister Mussa 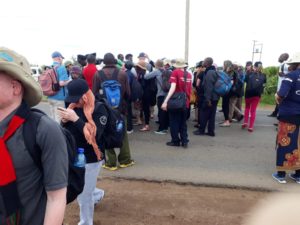 LILONGWE-(MaraviPost)-Malawi government through the minister of information Henry Mussa has warned to deal with all lawbreakers in the country.

Mussa told the nation through the press statement made available to The Maravi Post that government  will not condone lawlessness in whichever form it comes, even if it is hidden in the name of exercising rights.

This follows a commotion along M1 road close to Malawi Institute of Management (MIM) in Lilongwe on Saturday when the law enforcers where trying to disperse people with albinism who blocked the road in protest to the killings and abductions of albinos.

During the fracas about five albinos including their leader Overton Kondowe were injured in the process while seven were arrested including a journalist of Zodiak Broadcasting Station, John Paul Kayuni.

NO ROOM FOR LAWLESSNESS IN MALAWI

Government wishes to inform the public that it will not condone lawlessness in whichever form it comes, even if it is hidden in the name of exercising rights.

The events of earlier today, Saturday 9th March 2019, where some people with albinism blocked the M1 road close to the Malawi Institute of Management (MIM) in Lilongwe is lawlessness that should be rejected by all well-meaning and level headed people.

Blocking of the road, hurling insults and stoning road users can never be justified when Government has offered all avenues for dialogue and also provided support for members of the Association of People with Albinism in Malawi since they opted to conduct demonstrations and vigils.

Let the public including people living with albinism be informed that Government will not associate with exercising of rights in a manner that violates the rights of other people, inconveniences them, undermines their dignity and endangers their security and property.

Government has a duty to ensure that Malawi is peaceful, all people enjoy their rights, feel secure and respected and their property safeguarded. As such, anybody who conducts themselves in a manner that shows they assume to be above the law will not be tolerated.

We are aware that some of the misconduct that manifested its ugly head today is sponsored by enemies of law and order to provoke situations that would be blamed on Government in general and the Malawi Police Service in particular.

We wish to emphasize that no one is above the law in this country and the police will continue to fight lawlessness, ensure lawfulness and order, and secure life and property.

Once again, we would like to issue a stern warning that Government will neither defend anybody who violates the law for any reason whatsoever nor support exercise of rights in a manner that disregards the rights of other people.

Let us all ensure that Malawi is a peaceful country where laws are respected by all and rights are enjoyed by everyone.

Like it? Share it!
Ethiopian Airlines plane crashes on way to Nairobi with 149 passengers on board < Previous
DPP runningmate Chimulirenji visiting Zomba floods victims in focus Next >
Latest News From Malawi
Headlines From: The Maravi Post