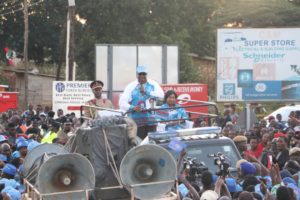 Companies that buy tobacco  will no longer be allowed to grow the cash crop from the  next growing season, President Peter Mutharika said on Saturday.

Mutharika brought the  good news to tobacco farmers on his whistle stop tour to the North.

Mutharika said he is always saddened to see that despite Kasungu farmers growing the top foreign exchange earner, they still swim in poverty because of poor prices tobacco buyers give.

“Tobbacoo buying companies will not be allowed to grow tobacco because they are stealing from the farmers. They grow their own tobacco and buy just a little from us.

“They even go to the extent of rejecting some. They will not grow the tobacco so that they are forced to buy from farmers. This will start from this year,” said  Mutharika.

Mutharika also assured the people of  continued development in  Kasungu if they vote for Democratic Progressive Party (DPP) during the 2019 Tripartite Elections.

“I am asking you to vote for DPP as it is a development conscious party. In the last five years we have

Mutharika also promised community colleges for each constituency in the country.

The Malawi leader also ordered the installation of Simlemba as Traditional Authority, besides elevation of Sub TA Mnyanja who has been  STA for a long time to full TA.

He instructed  Local Government Ministry to start the promotion processes.

Like it? Share it!
Vote for leaders whom you shall hold accountable-NICE < Previous
WVM commended for supporting ECD in Malawi Next >
Latest News From Malawi
Headlines From: The Maravi Post

Aleph Hospitality Enters The Democratic Republic Of The Congo