Mubarak Bala: In Defence of Free Speech and Critical Inquiry 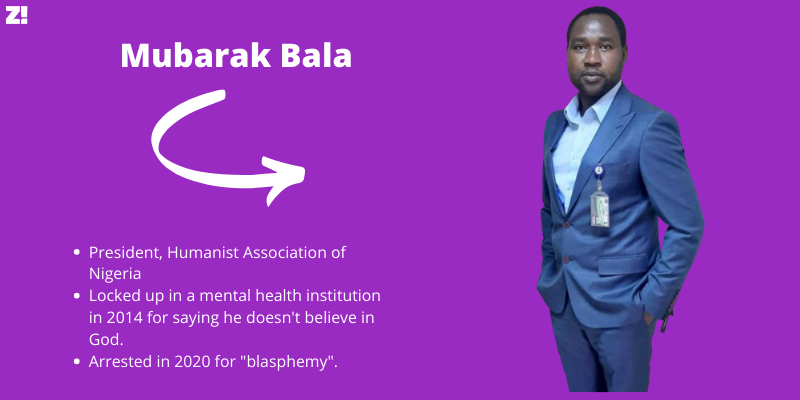 In the rabid quest to justify the disappearance of a Nigerian Humanist who made an innocuous post on Facebook, some Muslim fanatics have continued to peddle the notion that the said post crossed the limit of free speech. Did it? They have been relentless in voicing out this misguided notion and in publicizing a mistaken thesis: “You have a right to free speech, but you cannot insult another person’s religion”. One wonders if this set of Muhammadans ever listens to themselves or tries to discern the contradictions and inconsistencies therein. In this piece, I argue that this proposition encapsulates an acute misunderstanding of the limit of free speech amongst the jail-or-execute-Mubarak-Bala Muslims. Blinded by hate and ignorance, these Muslim fanatics have not understood the inherent contradiction and the counterproductive nature of their supposed limit to free expression.

Expressions that highlight other sides of a prophet or a religion are consistent with the values of free speech and critical inquiry because they are manifestations of independent thinking. Such expressions enrich knowledge and understanding of the prophet or the religion. They are not violations of moral or religious decencies as Muslim fanatics suppose. To hold a critical view is not a crime. Free speech and critical expressions are important for the generation and spread of ideas and beliefs. They are necessary for meaningful navigation of a world characterized by a diversity of thought and rapid flow of information and misinformation. Islam owes its origin and spread to free speech, to an unfettered expression of ideas. Islam is a religion that is critical of other religions. Islamic teachings contain views and opinions that differ from pre-existing notions; they make a caricature of faiths and beliefs. The prophet of Islam was critical of other religions and espoused ideas that ridiculed and sometimes radically departed from the knowledge and ideas of his time.

Thus if views that are critical of any religion are insults then Islam is an embodiment of insults, contemptible, and provocative ideas. If holding views that are critical of a prophet or a religion means insulting the religion or prophet, then, the prophet of Islam was a partaker in this exercise. The prophet of Islam proposed teachings that could be interpreted as insulting to pre-existing and successive prophets, to Christianity and other religions. By implication, the Quran is a codification of insults, of disrespectful and annoying propositions. The Hadith is a scroll of blasphemies. If, as some Muslim fanatics have proposed, the said Facebook posts by Mubarak Bala crossed the limit of free speech, then the teachings of Islam and the preaching by Islamic scholars and clerics also cross the limit of free speech. Muslim sermons are verbalized disparaging remarks on other religions and other prophets or philosophers.

But critical views are not insults on any religion or any prophet. To hold a critical idea is not a crime but an intellectual duty to humanity. Unfortunately, for centuries, Islamic demagogues have held people intellectually hostage in many places. They have censored the thoughts and writings of individuals. Islamic authorities have demonstrated a disdain for freedom of expression and criminalized Islam-critical expressions. Muslim clerics and theocrats have used various means and mechanisms to silence the voices of dissent while trying to perpetuate their religious doctrines, dogmas, and absurdities. It is pertinent to draw attention to their mistaken sense of limit to free speech, and the necessity of critical inquiry and independent thinking, tolerance of religiously offensive remarks in a culturally pluralistic Nigeria.

Leo Igwehttps://www.maravipost.com
Leo Igwe (born July 26, 1970) is a Nigerian human rights advocate and humanist. Igwe is a former Western and Southern African representative of the International Humanist and Ethical Union, and has specialized in campaigning against and documenting the impacts of child witchcraft accusations. He holds a Ph.D from the Bayreuth International School of African Studies at the University of Bayreuth in Germany, having earned a graduate degree in Philosophy from the University of Calabar in Nigeria. Igwe's human rights advocacy has brought him into conflict with high-profile witchcraft believers, such as Liberty Foundation Gospel Ministries, because of his criticism of what he describes as their role in the violence and child abandonment that sometimes result from accusations of witchcraft. His human rights fieldwork has led to his arrest on several occasions in Nigeria. Igwe has held leadership roles in the Nigerian Humanist Movement, Atheist Alliance International, and the Center For Inquiry—Nigeria. In 2012, Igwe was appointed as a Research Fellow of the James Randi Educational Foundation, where he continues working toward the goal of responding to what he sees as the deleterious effects of superstition, advancing skepticism throughout Africa and around the world. In 2014, Igwe was chosen as a laureate of the International Academy of Humanism and in 2017 received the Distinguished Services to Humanism Award from the International Humanist and Ethical Union. Igwe was raised in southeastern Nigeria, and describes his household as being strictly Catholic in the midst of a "highly superstitious community," according to an interview in the Gold Coast Bulletin.[1] At age twelve, Igwe entered the seminary, beginning to study for the Catholic priesthood, but later was confused by conflicting beliefs between Christian theology and the beliefs in witches and wizards that are "entrenched in Nigerian society."[1] After a period of research and internal conflict due to doubts about the "odd blend of tribalism and fundamentalist Christianity he believes is stunting African development," a 24-year-old Igwe resigned from the seminary and relocated to Ibadan, Nigeria
RELATED ARTICLES
Malawi