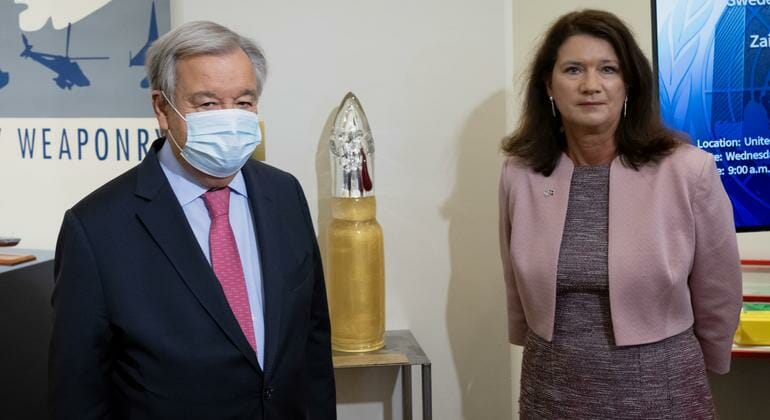 Speaking at the ceremony, UN Secretary-General António Guterres again expressed deepest condolences to the families of Zaida Catalán and Michael Sharp, who attended the dedication of Abused Ammunition, a glass sculpture which appears in the form of a golden bullet.

Ms. Catalán, who was from Sweden, and Mr. Sharp, an American, were members of the UN Group of Experts on the DRC, which supports the work of a Security Council Committee overseeing sanctions measures imposed on armed groups in the country.

They were abducted on 12 March 2017 while investigating reports of mass atrocities in the volatile Kasai region, following fighting between Congolese Government forces and armed militia.

UN peacekeepers found their bodies two weeks later outside the city of Kananga. The fate of their interpreter and three motorbike drivers remains unknown.

In January, a Congolese military court sentenced 51 people to death for their killing of the two experts.

“Their murder was a heinous crime”, the UN chief said.

“It was an assault on the values of the United Nations – an attack on the mission that countless women and men around the world risk their lives every day to uphold.”

Abused Ammunition honours that mission, said the Secretary-General, by imagining the sorrow of inanimate objects – in this case, bullets – over the part they play in death and destruction.

“The United Nations continues to assist the Congolese authorities in their investigation and prosecution of those responsible for killing Zaida and Michael, and the disappearance of the four Congolese citizens who were with them,” he told the gathering.

Mr. Guterres thanked the Governments of Sweden and the United States, who gifted the sculpture to the UN.

He also thanked Thommy Bremberg, the Swedish artist who created the sculpture, “for his message of empathy, and for honoring the achievements and sacrifices of United Nations personnel.”

Like it? Share it!
Tax ‘excessive oil and gas profits’ to ‘support the most vulnerable’, UN chief urges govts < Previous
Ghana: Decomposing bodies of lovers who migrated from Netherlands retrieved Next >