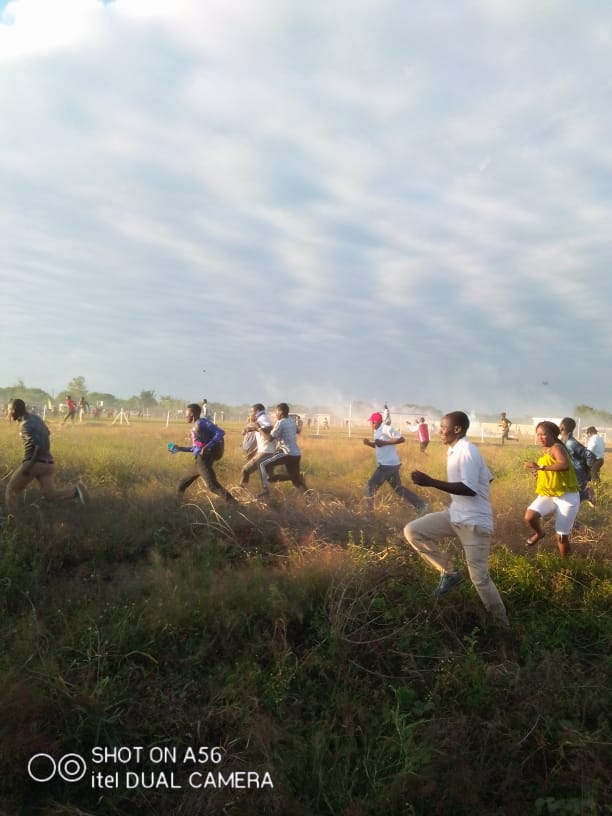 KARONGA-(MaraviPost)-The match played in front of a full partisan crowd at the soccer cathedral of Karonga stadium ended in chaos after the match was abundant following an awarding of a penalty to Karonga United that the referee Mercy Kayira later changed to a free kick.

After about 10 minutes of Karonga United Player’s protest to not carry on the match, the referee brew the final whistle where at the time Silver Strikers were a goal up cutesy of Blessings Tembo.

The decision to blow the final whistle did not sit well with Karonga United supporters as they began pelting stones in the stadium.

In reaction to the supporters’ pelting of stones, the police unskillfully began firing teargas in the stadium at the direction of the pitch where players of both teams, officials, journalists were standing to avoid the chaos.

Upon the chaos, people began filling out of the stadium in all directions to seek refuge from the bombardment of teargas including this reporter.

According to a number of speeches head outside the stadium, the supporters for Karonga United were not amused with the reaction of the Police saying teargas was not the best way of crowd control.

Speaking in an interview with one of the officials who opted for anonymity said the police had the chance to control the crowd way before chaos erupted.

He said: “The situation got out of hand quickly and the police are to blame as children and the elderly were also inside the stadium so teargas should have been the last resort to use.”