President Muhammadu Buhari’s Youth and Sports Minister, Mr.Sunday Akin Dare must be a really SAD man now. For all the wrong reasons, the digital savvy minister has been in the public space back to back with more national embarrassments uploading.

The SAD man who claims to know all the athletes and the number of medals they’ll bring back from the ongoing Tokyo Olympics in Japan has been roundly disappointed following his contributions to the disastrous outing in Tokyo. Team Nigeria’s outing hasn’t only been full of drama but also a national embarrassment courtesy the sports minister. 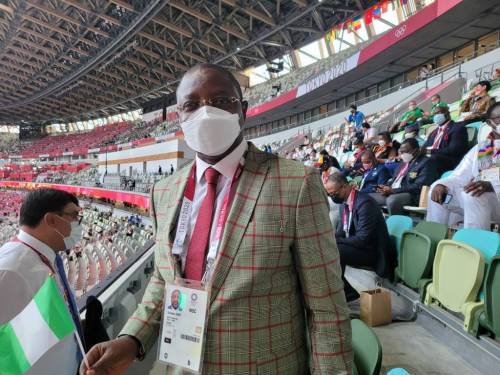 How best can one describe the back to back display of shame brought to the country by Mr.Dare? From the day of his arrival in Tokyo till date, it has been one drama after the other. The events leading up to disqualification of 10 athletes is worst than that captured by Anezi Okoro in her novel ‘One Week, One Trouble’.

Before the departure of the women’s basketball team DTigress to Tokyo, the former Team Manager Mactabene Amacheree had called out the sports Ministry for failing to pay them their entitlements for winning the women’s Afrobasket in 2017. It started like a rant but Ms Amacheree insisted that since the Minister had claimed that money owed basketball has been paid to the federation, how come players were still being owed bonuses and entitlements since 2017. This was the genesis of more protests to come.

The disqualification of 10 atheletes was a premeditated action taken by the minister. Ignorance is never an excuse for maladministration.

Moreover, Mr.Sunday Akin Dare had been earlier notified about the consequences of not carrying out three out-of-competition Doping tests on all athletes competing at the Olympics level, 8 months before the ban. The Ibrahim Gusau led board drew the Ministry’s attention to Rule 15 of the Atheletics Integrity Unit AIU which classified Nigeria as a Category A Federation but the minister turned a deaf ear to the warning bell in a bid to override and intimidate Gusau.

Just like he thought he could maliciously discard a duly and democratically elected AFN board led by Engr Ibrahim Shehu Gusau, he also threw away several notifications by the same board hinting him on the consequences of not testing the athletes.

The responsibility of testing athletes lies with the Ministry of Youth and Sports which in turn should fund the National Anti-Doping Agency NADA. The Minister continued as the all knowing , English speaking administrator and overruled the warning from the Ibrahim Gusau Board. His recklessness towards the Atheletics Federation of Nigeria AFN cost Nigeria 10 young medal prospects. The national embarrassment will remain indelible in the history of the Olympic Games.

The Sports Minister did not know the impact of barring 10 Nigerian athletes from taking part in the global games. He went a step further by dismissing their suspension from the games and quickly dished out a press release, calling them ‘alternate athletes’.

Seriously, Mr Minister! Alternate athletes? He speaks impeccable English. That’s his trade mark but I went to the dictionary to make sure I wasn’t missing something. Alternate means alternative, replacement, stand-in, reserve, back up, standby, etc.

Among those 10 barred athletes was Annette Echikunwoke – African record holder in the women’s hammer event. Favour Ofili is the 2019 African Games silver medalist in the 400 metres. She is also the 2019 African Youth Champion in the 200 and 400 meters, African Record Holder Women’s 200m (Indoor)/ African Games Silver Medalist.

Ruth Usoro jumped 6.82m in the long jump, the 2nd best jump in the world for the season at the time and the 3rd best on the Nigerian all-time list. She’s the African Record Holder Triple Jump (Indoor)

Chioma Onyekwere holds the African record in the Women’s Discus, Rosemary Chukwuma is the Youth Olympics Champion while

Chidi Okezie is an African Games Bronze Medalist in the Men’s 400m. Are these who you call alternate athletes? Did NADO test them in the first place and their tests didn’t meet the WADA sample collection and analysis standards? When last was NADA funded by the Ministry of Youth and Sports? Is there no budget for Doping? Haba!

Then the athletes carried placards in the Games village to protest the injustice being meted to them. Not only was the ministry responsible for their ouster from the games but also provoked them to protest.

How? They tried to take ten Samsung phones each worth a thousand US Dollars gifted to all athletes in the village including the banned 10 and hell was let lose.

The Ministry had to save its face with a miserable explanation, pushing the Nigeria Olympic Committee to take responsibility for taking the phones.

Next day, the Atheletics Integrity Unit AIU dealt Nigeria a big blow following the suspension of Blessing Okagbare for testing positive to a growth hormone(a steroid and a banned substance).

Who know what’s next .

Enough of these adminstrative malfeasance tagged to this minister of the Federal Republic of Nigeria Sunday Akin Dare SAD. Let him shut up and resign now!

Like it? Share it!
President Buhari: Call Off Your Fulani Killers While We Pursue Peace, & Global Security Via The NINAS Movement, By Ndidi Uwechue < Previous
Malawians mourn legendary actor Eric Mabedi “Jakobo’ Next >
Recommended stories you may like: