HomeLifestyleTributes pour for Prophet TB Joshua: A 'Man of God' who gave...
LifestyleObituaries

Tributes pour for Prophet TB Joshua: A ‘Man of God’ who gave to the poor, say followers 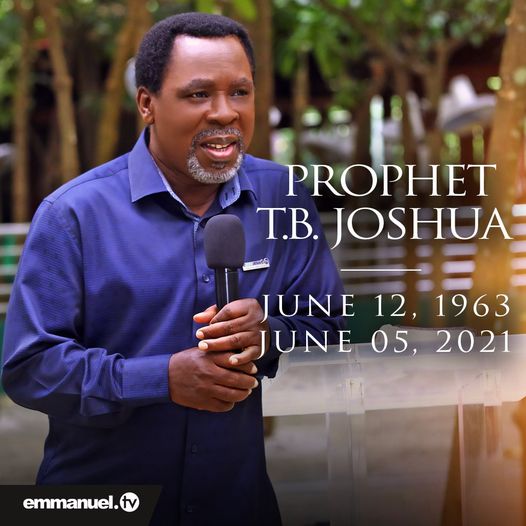 LILONGWE-(MaraviPost)-Tributes are flowing in for televangelist TB Joshua of the Synagogue Church of All Nations (SCOAN), who died on Sunday, June 6, 2021 in Lagos, Nigeria aged 57.

Details surrounding his death are still not available shortly after hosting a meeting with partners of his TV channel, Emmanuel TV.

Joshua was known as a fiery preacher and had followers worldwide. He used his TV channel to attract a large number of Christians from across the world.

The TV channel, which is run by Joshua’s church, is one of the largest Christian broadcast stations,  available on DStv channel 390 and digitally on social networks.

Joshua was one of Nigeria’s most influential and wealthiest pastors whose followers include prominent politicians and business leaders from across Africa and around the world.

On Sunday, members of SCOAN and friends were weeping at the church premises following the news of the death of Prophet TB Joshua.

Indeed, his death is a big blow to many persons especially those blessed via his messages and show of love.

At the premises of the church, hundreds of church members and well wishes gathered to mourn his demise.

Many throng the premises crying. This indeed shows that he is a man loved by many people whether Christians or unbelievers. His love was not just to only christian. He showed love both to Christians and non Christians. He was not biased.

See some of the pictures are the church premises.

What do you think about this painful death and the reactions of people?

You can remember, the well renowned prophet and tele-evangelist died yesterday. He died at the age of 57 and his death was a great shock to all.

On social media, his followers are in mourning.

On Twitter, @DrOlufunmilayo shared: “TB Joshua was someone who actually touched the lives of many poor people. Unlike many others, he was one pastor who actually reached out to poor people and always tried to help them.”

SimNom Barry said: “Daddy, may ur soul rest in peace with the Lord.”

@Irunnia tweeted, “This man fed widows & orphans, trained people he never met in schools and gave people jobs. He was hardly involved in stupid politics like most other pastors & prophets.”

In September 2014, his church became a horror scene when the church’s six-storey accommodation building collapsed, killing 116 people of whom 87  were South Africans.

In July 2015, a coroner’s inquest found the collapse was as a result of negligence and the church should be held criminally liable for the deaths.

Joshua denied allegations of negligence and the trial of the incident is still under way.