Members of the UN mission and UN Under-Secretary-General Jean-Pierre Lacroix paid tribute on Monday in Goma – in the absence of the Congolese authorities – to five peacekeepers killed in a week in the eastern Democratic Republic of Congo, an AFP team found.

A Moroccan peacekeeper was killed Tuesday in Butembo during violent anti-Monusco demonstrations. In the same circumstances, two UN police officers of Indian nationality were also killed. On the demonstrators’ side, nine people were killed, according to hospital sources.

The next day, Major Mouhamed Rami, a Moroccan national, died “accidentally,” said Bintou Keita, the head of Monusco in Goma, where tributes were paid to the peacekeepers.

A fifth peacekeeper, Moroccan Abdelaziz El Maskyni, was killed in the town of Bunagana in Rutshuru territory, where peacekeepers are supporting the DRC’s armed forces in operations against the March 23 Movement, a rebellion backed by Rwanda, according to Congolese authorities.

At the peacekeepers’ memorial ceremony, the Indian, Moroccan, UN and Congolese flags flew side by side, but no Congolese officials were present.

“We must be attentive to the sometimes completely unfounded reasons that motivate this hostility (towards the Blue Helmets) in order to learn all the lessons and work jointly with the Congolese authorities to make the necessary improvements,” said Bintou Keita.

“The best service we can render to all those who lost their lives is to redouble our efforts and do so in such a way that these episodes of violence do not recur,” urged Jean-Pierre Lacroix, head of the UN peace department.

One of the largest and most expensive UN missions in the world, Monusco has been in the DRC since 1999. It currently has more than 14,000 peacekeepers, with an annual budget of $1 billion.

Since 2019, it has been facing growing hostility from the population, which accuses it of ineffectiveness in its mission to neutralize the hundred or so local and foreign armed groups active in the eastern DRC. For the past seven days, the death toll from the protests against Monusco has been 18 on the side of the demonstrators and

For the past seven days, 18 demonstrators have been killed in protests against Monusco.

The Congolese police and army used warning shots on Monday to disperse demonstrators who were approaching a base of the United Nations Mission in the east of the Democratic Republic of Congo (Monusco) a day after two Congolese peacekeepers were killed, an AFP correspondent noted.

Police officers fired tear gas and soldiers fired into the air to disperse two columns of dozens of anti-Monusco demonstrators in the town of Beni at the call of pro-democracy movements, the AFP correspondent in Beni (North Kivu, east) noted. 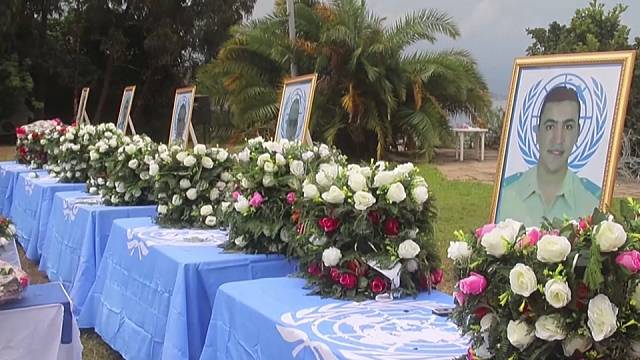 Like it? Share it!
Health Ministry to promote breastfeeding in working places < Previous
US drone strike kills Al-Qaeda leader Ayman al-Zawahiri Next >