You are here: Home » Development » Children ‘indoctrinated’ to fight for insurgents in Mozambique: UNICEF

Children ‘indoctrinated’ to fight for insurgents in Mozambique: UNICEF 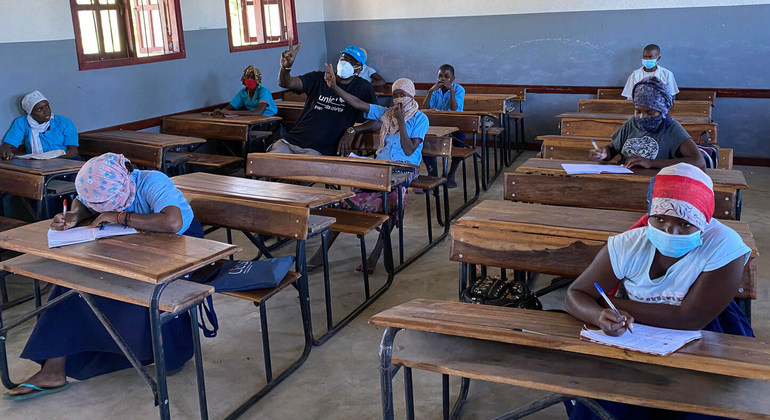 Under the occupation of al-Shabab militia, the gas-rich region witnessed one of the world’s fastest-growing displacement crises, UN humanitarians have said.

Speaking to journalists during a regular briefing in Geneva, Mr. Elder added that other reports about young boys and girls who had been abducted from their families and villages “match accounts told by family members to UNICEF’s field staff and partners. This is leaving little doubt that children are being forcefully recruited by this non-state armed group.”

When fighting broke out in March, humanitarian access to the district was completely blocked, including to tens of thousands of people who had fled the violence.

Many were from the coastal town of Palma who were displaced after militants staged a surprise ambush which reportedly left dozens dead.

The UN agency said that they and partners including the UN World Food Programme (WFP), the UN migration agency (IOM) and partner organisations had “only very recently” managed to delivered hygiene kits, water purification tablets, food and shelter to the displaced population in Palma, with the help of the Mozambican authorities.

According to WFP, the insurgency in northern Mozambique left at least 730,000 people in Cabo Delgado with no access to their lands and no means of earning a living.

Food security data captured before the attacks in Palma town in late March 2021, indicated that nearly 228,000 people were highly food insecure. “This number is projected to increase to 363,000 during the lean season beginning in October,” the UN agency predicted.

Mr. Elder explained that the recruitment and use of children in armed conflict is a grave violation of international law, and that all youngsters who are recruited for this purpose should be treated as victims.

In addition to losing their families, he added that the youngsters are likely to have been exposed to extreme violence, sexual violence and abductions.

The affected children will also have missed schooling that is vital to their future wellbeing, the UNICEF spokesperson insisted, before urging “all feasible measures” to ensure that they are “demobilized, disengaged, or otherwise released, and provided with all appropriate protection services for their social reintegration”.

In a statement, UNICEF also welcomed an agreement signed with the Mozambican Ministry of Defence to increase protection measures for children affected by conflict in Mozambique.

“UNICEF continues to work in collaboration with the Government and partners to prepare the services that will be greatly needed by rescued children to support their physical and mental health and psychosocial wellbeing, as well as safe reintegration to communities,” the agency said.

Like it? Share it!
Democracy Gone Wrong, By Evans Ufeli Esq < Previous
Tigray: Food aid reaches Afar and Amhara, but situation still ‘dire’  Next >
Recommended stories you may like: