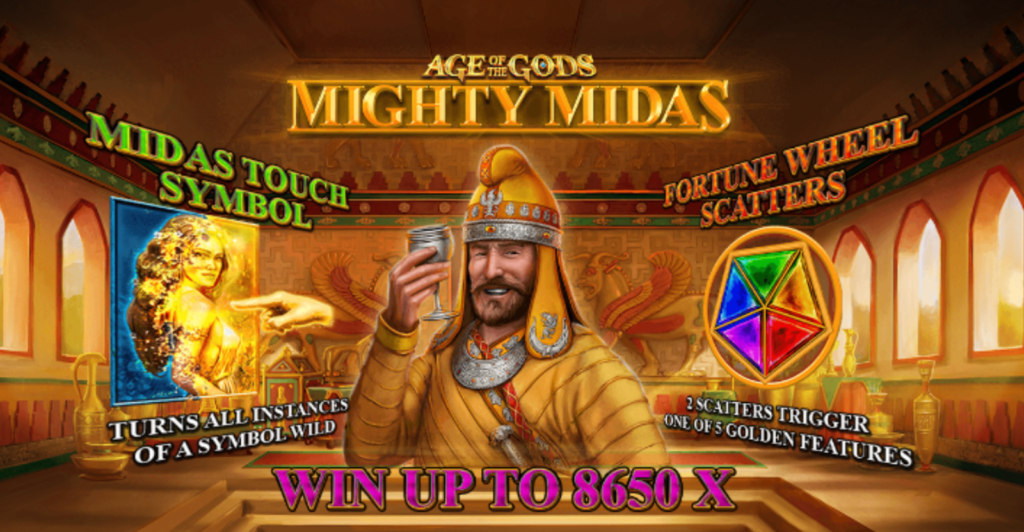 For a couple of years now, Playtech’s Age of Gods series of slots have been a firm favourite of slot players across the net. Ever since the casino software providers announced that they would be replacing their Marvel jackpot slots with a series based on Greek mythology, there has been a lot of interest in them.

Over those few years, Playtech has rapidly expanded their Age of Gods series, with top titles taking on the tales of various heroes of Greek mythology, such as Zeus, Hercules, Athena and more. Recently, the developers launched Age of Gods: Medusa and Monsters, and players won’t need any introduction to the star of that slot. Now, they are unveiling a new game in the series, known as Mighty Midas slot.

Like other Age of Gods, the new Mighty Midas game contains four progressive jackpots and offers a versatile betting structure. There are 40 paylines spanning the reels of the new slot, and wagers cost as little as 40p a game.

What better way to celebrate this Christmas than by bagging one of four progressive jackpot prizes that are there to be won. These are triggered at random and can dish out anything from £10 to £500,000 or more if you match 3 identical prize symbols in the jackpot bonus game.

The slot uses multipliers heavily, and this can result in big non-progressive wins being paid out to players, too. In the legend, everything King Midas touched turned to gold. In this release, Midas Touch icons can turn any other symbols into golden wilds, and they can triple the value of any winning combinations in which they appear.

The slot also comes with 5 bonus rounds. They are free spin features, but each brings its own bonuses to the table, but again, multipliers are prominent in all those rounds. The Ruby feature is arguably the most prosperous, coughing up multipliers which could be worth up to 30x the standard rate of pay over 7 spins. Few players would say no to that.

Win a Progressive Jackpot This Christmas

If you fancy hunting down a progressive jackpot this Christmas, Age of Gods: Mighty Midas is a great way to start. You can find the free play demo of this new Playtech slot, as well as top casinos offering the game over at Tunf.com right now.

Like it? Share it!
Calls mount on West to lift sanctions on Zimbabwe < Previous
“We are not changing MP Beatrice Mwale” , declare people of Kasungu north Next >
Recommended stories you may like:

NFL: Are the Bengals hitting their form at the perfect time?