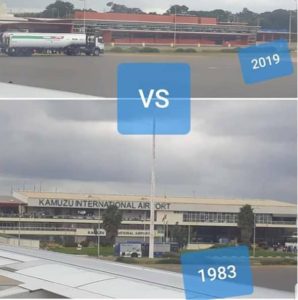 Spot the difference of the old KIA and newly constructed one

About MK26 billion has been used for the construction of the terminals with support from Japanese Government.

But the terminals’ structures outlook have not impressed Malawians who have ridicule President Peter Mutharika’s leadership for giving the nation raw deal.

Malawians on social media; Facebook, WhatsApp, have taken to task Mutharika over the substandard structure that does not appeal to international stance.

Below are some of reaction from Malawians on the social media; Facebook

Yowati Nthenga I had high hopes that the new terminal building will be a magnificent structure more elegant than the old one. This is mediocrity for sure, but our leaders are well traveled ,do you really have class gentlemen? We need high rise buildings not this insult to Malawi nation iya

Charles Mangani My brother, Malawi is a failed state sure

Patrick Bongani Madise Not the best but progress all in all, just hope it doesn’t take over 20 years again to get an upgrade..

Wantwa Mungalwagha Mwahimba I still thank the late Kamuzu Banda. He did a great job. These others are just adding extensions to already existing structures. I will appreciate someone building a totally new and state of the art international airport.

Mwafulirwa Ndawona Dennis So the rehabilitation of the airport costed tax payers roughly MK26 billion right? And when designing the rehabilitation did government had plans of building another international airport or this is it for the next 20 or so years?

Flytone Simukoko Very nice, and would have been very happy if it was my tax.

Lutangu Wasilota Come and see the new KKIA in Lusaka.

Nafe IngIng Zambians are calling it a Maternity Wing

Nafe IngIng Dear Official Malawi Government Online this is what an airport should look like:

Levie Nkhoma Not a structure for an international airport. If you tell me we have started with a domestic terminal and the next to it will be an international terminal, then may be a good start. #Wedeservebetter

Bydon Mughogho Many thanks to the Japanese people and the government.

Lowani Mtonga Malawians praising everything. Go to Lusaka, Gaborone or Nairobi and see the airports. I don’t want to mention Joburg. We’re still behind.!

Oscar Shida Nkhoma Even though we need these structures, but the inside height is too low. This will be an oven, more especially with power failure, it will be bad in there. I hope the air conditioning system remains excellent, otherwise when faced with flight delays it will be horrible inside there.

Peter Frank Malungo Makamo NDIYE WINA AZITI …APM has done nothing …kulozedwa….these are fruits of investment drive this gov took to woo investors to partner with our gov in abid to improve infrastructure….

Like it? Share it!
Desperate time; DPP Strategists plot to crucify Chilima with fake corruption charges on public reforms    < Previous
Unknown thugs break into MEC’s Lilongwe offices Next >
Recommended stories you may like: