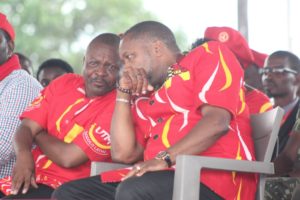 Chilima and Usi in Neno

BLANTYRE-(MaraviPost)-The governing Democratic Progressive Party (DPP) strategists have been meeting in Blantyre for the past two days trying to manufacture ‘evidence’ of corruption against Vice President Saulos Chilima when he was chairing the Public Reforms program.

The plan is to immediately arrest the owner of Movesa,which implements the reforms at Road Traffic Directorate so that he implicates Chilima in the process.

The plot is to silence Chilima who is also UTM Party a head of May 21 polls which the main contender.

With inferiority complex within DPP ranked, President Mutharika was convinced to remove Chilima from his able duties for fear that the UTM leaders could steal show to the public.

Efforts to get reaction from DPP Spokesperson Nicholas Dausi proved futile to substantiate the claims as was not available.

This publication will give readers more information about the plan and the names of the people involved in the plot as the story develops.

The UTM Party leader has been exposing the ills of President Peter Mutharika-DPP leadership since July 2018.

Chilima revelation on DPP corrupt scams have been vindicated which putting the party at disrepute.

Like it? Share it!
Commonwealth celebrate 70th anniversary < Previous
Malawians on social media ridicule President Mutharika’s 3 newly constructed KIA terminals… Is this a maternity wing? Next >
Recommended stories you may like:

Chakwera’s MCP shouldn’t be obsessed with power, naïve that can win elections sorely