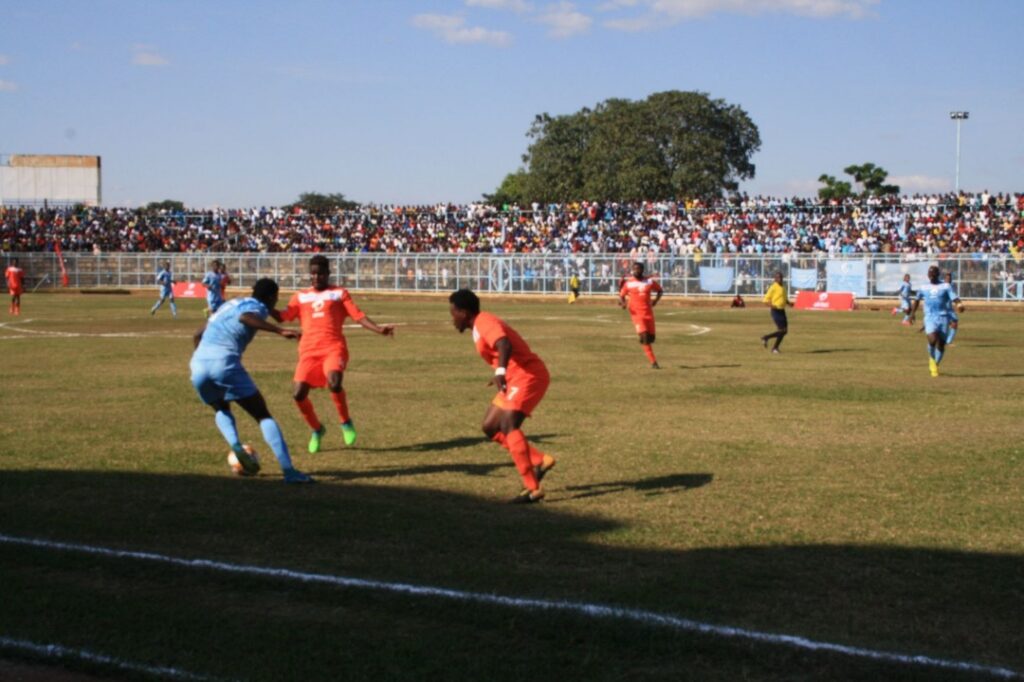 Ops! Finally, TNM Super League minnows have managed to pocket maximum points after a tricky start of their new season as the journey to remain in the top flight league continues in week five.

The minnows namely Chitipa United, Mlatho Mponela and Ntopwa were rocked in the relegation battle for four weeks have a better say when they were able to record their first wins in week five.

The new comers wins has thrown 2017 TNM Super League Champions, Be Forward Wanderers to relegation zone and currently, they are anchoring the log with two points from two games played so far.

Blantyre based, Ntopwa in their second outing faced fellow new comers, Chitipa United in Karonga on Saturday where they pulled their first win of the league with 1-3 win.

Ntopwa found the back of the net through Davie Banda, Tione Jailosi and Friday Osagie while the host pulled one back through Shelton Banda’s penalty.

Leo Mpulula’s charges had misfortune on their travel up north on Sunday when they were massacred by 2019 Airtel Top 8 semifinalist, Karonga United 4-1.

This is a second 4-1 defeat, Ntopwa has suffered so far in the season and the first one was  two weeks ago when they played host to Bullets and lost to the same margin.

The Blantyre men went down 24 hour later when Karonga scored through Aziz Mwakifuna from penalty spot twice, Bernard Msiska and Gule Mwalusa while the visitors got their consolation goal though an own goal (og) scored by Lusekero Malemia, making it second og of the season after Dwangwa Hope Kaunda when they lost to Civil Sporting 2-0

“If this is the standard of officiating the country is having them we have a long way to go and I better pullout in sponsorship business of football. They have clearly being unfair to us,” he lamented.

Osman said officiation personnel should be there to control the proceedings of the game not influencing results for a particular team of their choice of liking.

With the win, Ntopwa are still in relegation zone and have dropped to position 14 to 15 but they are better than Wanderers with a point from six games.

Chitipa United Tuesday stunned Karonga United 0-1 courtesy of Lupakisho Mwalukazinga goal to register their first win of the season,  after managing to get draws from Silver strikers 0-0 at home  and Kamuzu Barracks 1-1 away in Lilongwe. They have lost to Dwangwa United 1-0 and Ntopwa 1-3.

Last week, Chitipa were on 13th position and win the win have moved to 10th position with five points from five games.

Mlatho Mponela got their required three points from Mighty Tigers on Saturday at Civo stadium to the amazement of many soccer fans when they registered a 2-0 win at home.

Tigers who played to a barren draw to league leaders, Blue Eagles in Mulanje failed to resist the pressure the Dowa based boys had paused to them.

Mlatho has moved two steps up from position 16 to 14 on the standings but they are still within the relegation battle together with Ntopwa and Wanderers.

TN Stars could be crowned team of the week after collecting maximum six points from two games on Sunday and Tuesday to move to second position from six just a point to closer to current leaders, Blue Eagles with 11 points.

The Kasungu based outfit grabbed three points on Sunday when they silenced Mighty tigers with a 2-0 beating before edging their neighbours, Mlatho Mponela with a 1-2 win.

TN Stars started the season on a bad note when they lost 1-4 to defending Champions Bullets on the opener, got beaten away to Moyale 3-0 before securing a 2-2 draw against Mzuni in Mzuzu.

League leaders, Blue Eagles are still on top despite losing at home, Nankhaka ground 2-0 to Kamuzu Barracks to drop three points from the first time at home.

Surprisingly, Eagles managed to collect maximum points over Wanderers in Blantyre two weeks ago when they earned a 1-3 win and this prompted the sacking of Nomads technical panel led by Bob Mpinganjira.

From the Sunday victory, many thought Eagles/Kamuzu Barracks game will be a walk over for the Eagles but the Chiwoko men had other ideas in which new revelation goal scorer, Marshall Maluwa claim a brace of the season and third to his credit.

Blue Eagles drop two points two week ago when they were held 0-0 against Mlatho Mponela.

The Area 30 outfit, might attribute their loss to the influential captain. Micium Mhone who was with the national team playing against Eswatini in Blantyre in the CHAN qualifiers where flames drew 1-1 through his goal but the visitors progressed on away goal rule.

Blue Eagles have established themselves as pacesetters of the league but now they have started dropping points unnecessarily to the advantage of other teams that have played less league games.

They have played six games and have 11 points in the bag.

Due to national and cup engagements in week five, some teams had not fixture to fulfill and this affected their log standings in which Wanderers have the first time in the season are anchoring the log table with three points from two game, Silver have dropped from position nine to 12, Bullets have gone one step down to five from four.

“The clear picture on how the league will be shaping up is when all the teams will play at least 10 games each. It’s laughable to imagine that currently 2017 Champions are anchoring the log. In real sense, they have played less games but mind you game in hand sometime are unpredictable,” A Chilomoni based Silver Striker die hard, Nawali Harawa noted.

He said the fixture committee of Super league of Malawi (SULOM) need to run the fixture fairly because some teams with less game would be playing under pressure in catch up games.

Like it? Share it!
Suspected DPP violent youths attack MCP supporters ahead of  Mia’s rally < Previous
Chimulilenji at the center of Gertrude Mutharika’s presidential ambitions? Next >
Latest News From Malawi
Headlines From: The Maravi Post